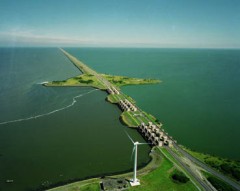 Dutch water management experts have tremendous knowledge – not to mention experience – that should be tapped to forestall or lessen the impact of super storms and hurricanes on the United States’ East Coast and the Gulf. So why aren’t we listening?

The Dutch have lived below sea level for centuries – and have taken a pounding with brutal North Sea storms. One of the worst,  January 31-Feb 1 1953, caused devastating flooding in South Holland:  1800 people killed,  9% of Dutch farmland flooded, thousands of animals lost,  over 47,000 buildings damaged –  a cost of nearly  (one billion guilders)  €450 million. (See the video) 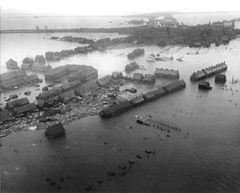 Among the many engineering and management marvels devised to ensure that flood-prone areas won’t be swamped again, are the massive Delta Works Project; the huge movable storm surge barrier gates (Maeslantkering) that protect the Port of Rotterdam (the busiest port in Europe); and computerized water management that extends deep into the polders with active local water boards.  (Check out the Dutch Water Defense video)

“Wim Kuijken, the Dutch government’s senior official for overall water control policy [says] ‘The U.S. is excellent at disaster management,’ but ‘working to avoid disaster is completely different from working after a disaster.’”

Check out examples of Dutch innovation in deltas and flood management