For the college-bound or those who want to work in higher education, the just-published 7th Annual CoolSchools Survey by Sierra Club maps out the greenest colleges and universities. Free and online, it ranks 162 schools in the US, including the Top 10 greenest colleges and universities. The rankings are based on institutions’ filling out and returning an online survey with specific factors –energy efficiency, food, recycling, water, curriculum and others.

You can learn who’s greenest and why by reviewing the complete  survey results. An additional 152 schools are ranked in the CoolSchools for 2013. Remember that other “green school” surveys – namely the one done by Princeton University, employ a different methodology for their ratings.

What does it mean ?

More than ever, academia is addressing the realities of rising costs with efforts to reduce infrastructure and operating costs through energy efficiency (windows, boilers, sustainably designed dorms), recycling rather than landfills, reducing food waste, bicycling and transit over cars and parking lots.

It also means that students are looking for careers in sustainability, engineering, design and other fields where they can put green skills to work. (Dickinson College #2 in the 2013 Top Ten has incorporated sustainability throughout its four-year curriculum).

Check out other stories in Green News Update  (below) on green schools.

Greenest campus in the Pittsburgh Region (Chatham University # 24 in 2013) 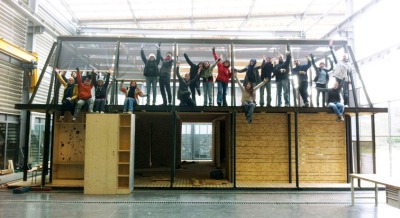 Students worldwide want a greener world! The European Solar Decathlon 2012. Students from Rhone Alpes team standing inside their maquette (they won the Decathlon)