What did Hurricane Sandy do to New York’s iconic parks and gardens? Keep in mind that New Yorkers crave these places as public “living rooms” where they can run, skate, push the stroller, wander and take a break from the urban pressure cooker.  After 9/11 many New Yorkers sought quiet places at the Brooklyn Botanic Garden (BBG)  and The New York Botanical Garden (NYBG) to take refuge and grieve.

Both Central Park and Prospect Park are historic parks and public spaces that retain the distinctive landscape design of Fredrick Law Olmsted and Calvert Vaux.

Come back next week to read about what the superstorm did to Central Park, The New York Botanical Garden, Brooklyn’s Prospect Park and Brooklyn Botanic Garden – and how they are recovering. You’ll hear from Jessica Schuler, manager of NYBG’s Thain Forest (the last surviving old-growth forest in New York) on how loss has led to new research; and how some downed trees at the BBG were transformed into a playhouse structure. There’s much more, so we welcome you back !

Downed trees near the Lincoln Playground in Brooklyn’s Prospect Park. 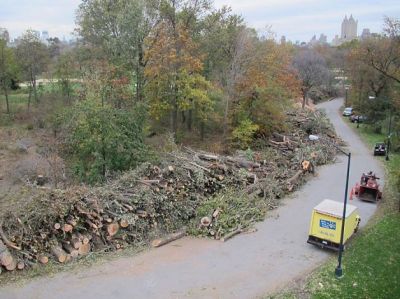