During Earth Week,  Green News Update will share stories of 10 people, places and projects that you’ll want to follow. They deserve our attention and support. First up: Dr. Dee Boersma, University of Washington conservation biologist, with a passion for penguins.

Dr. Dee Boersma uses a wry sense of humor and a wealth of data from long-term scientific research to share her passion for penguins. She calls them “the sentinels” of ocean health and changing climatic conditions. She should know:  for 29 years the University of Washington Professor (and Pew Fellow) has assessed the biological characteristics of Magellenic penguins – the largest breeding colony of these birds, also known as “jackass” penguins for their braying call — in Punta Tombo, Argentina, where she has documented foraging patterns, migratory routes, and anthropogenic threats to their survival. 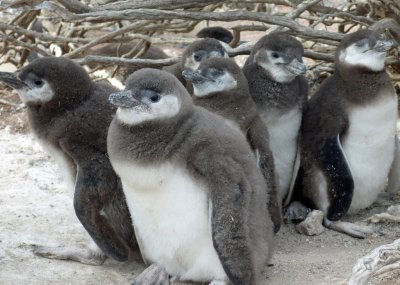 Magellenic penguin chicks. Photo by Dee Boersma University of Washington. The Japanese wanted to harvest Magellenics to use the protein and make golf gloves from their hide. It didn’t happen!

Just watch her TED talk video (see below for link) or read her interactive talk (available in in 21 languages) and you’ll see how she weaves together their story and the threats faced by these superfast swimmers, who live and nest in highly dense groups, and range hundreds of kilometers in searching for food  (“they dress well,” she adds impishly). 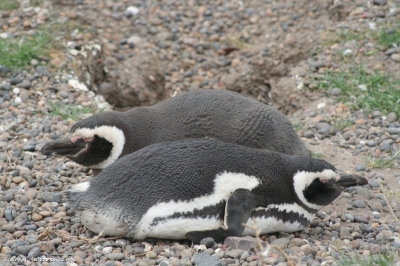 For Boersma, there is little humorous about the multiple threats she has documented over decades of on-the-ground research, and, with support from the Wildlife Conservation Society,   mapped  their movements with satellite tags (yes,  applied to their backs by hand).  The results show: Adults and their chicks are in decline from a multiplicity of environmental and climatic factors.

In El Niño years, warmer ocean currents reduce the available food supply. That means having to swim farther (hundreds of kilometers) to forage for their chicks.  For years, oil slicks from oil tankers releasing their ballast water coated and killed adults and chicks (Argentina’s government was in denial for 9 years, then moved the shipping lanes farther away; other coastal areas in Argentina, Uruguay and Brazil are still vulnerable.)  Climate changes that result in prolonged periods of heat and cold, along with more intense storms, are all-too-real threats to reproduction and chicks’ survival. While adults have waterproof coats, chicks are born with downy feathers and don’t get their waterproof coats until they’re about 40 days old.

Says Boersma at TED, “We know that it’s not only Galapagos penguins that are in trouble, but Magellanics and many other species of penguins….  The population [of Magellenics] is declining and it’s declined fairly substantially, about 21% since 1987, when I started these surveys, in terms of number of active nests.” Read the PLOS One research paper by Dr Dee Boersma and co-author Ginger Rebstock on how climate change is tied to chick deaths.