Rendering of Maison Reciprocite, one of the 20 team solar-powered houses competing in Versailles France.

Twenty international collegiate and technical institute teams are getting ready to build solar-powered houses and compete for top awards at the European Solar Decathlon 2014, in Versailles, France. You can follow the June 28-July 14 competition through the Green News Update website and our direct links to the competition. Check back soon for a preview of the Decathlon –our upcoming feature story on Maison Reciprocité, the joint Decathlon team of Appalachian State University (North Carolina) and the Université d’Angers (Angers France). Link to the Solar Decathlon web site 2014

Each multidisciplinary team spends about two years planning, designing, engineering and fabricating their houses based on specific requirements (size and cost especially) then transporting them to the competition site (panelized or knocked down) by truck or container ship. These are high-tech houses that rely entirely on solar power for all energy, and there are a host of other  green features incorporated into the houses (living green walls, recycled materials, low flow toilets, etc).  Professors, mentors and technical experts in everything from dessicant systems to web design are there to provide assistance and advice along the way. It’s a rich educational program as well as a competition.

The Solar Decathlon started in 2002 as an initiative of the US Department of Energy. Since then, the US has sponsored five more US competitions, and signed agreements with Europe, China and just-announced Latin America/Caribbean for international competitions.

Green News Update has covered the Solar Decathlons in Spain, China and the US over the past few years. Here are links to our coverage in 2012 and 2013.

The future of sustainabilty! Teams assemble at Datong Solar Village for a group shot. 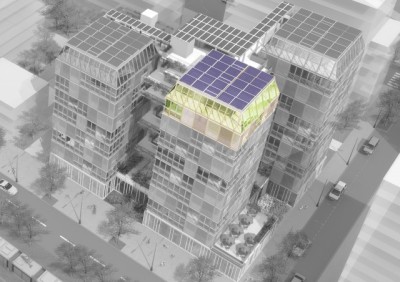 Canopea by the French team of Rhone Alpes, won the 2012 European Solar Decathlon