which debuts June 28 at the Chateau of Versailles, France, just a half-hour from Paris.  Selected from among 44 applicants on several continents, the teams compete in 10 different contests with their custom-designed and -engineered, solar-powered houses. The juried competition runs until July 14 when the winner is announced.  We are putting a face on the 2014 European Decathlon with this preview story on  Appalachian State University  (Appalachian)  in Boone, North Carolina, and its partner “sister school,” the Université d’Angers  (France). Come back for stories on other teams and the June 28-July 14 competition through the Green News Update website and our direct links to the competition.

Partner across the Atlantic -the Universite d’Angers team

The Solar Decathlon started in 2002 as an initiative of the US Department of Energy. Since then, the US has sponsored five more US-based competitions, and signed agreements to hold Decathlons in Europe, China and recently announced Latin America/Caribbean region. (Links are at the end of the story.)

Each multidisciplinary team spends about two years planning, designing, engineering, specifying and fabricating its house, then transports it to the competition site ( in flat, panelized or modular sections) by truck or container ship for reassembly.  These are high-tech houses that rely entirely on solar power for all energy uses (cooling, electricity,  refrigeration, laundry) and there are a host of other high-performance features incorporated into them (living green walls, recycled materials, low flow toilets, etc).  Professors, mentors and technical experts in everything from dessicant systems to web communications offer advice and assistance along the way.

It’s a rich educational program as well as a competition. 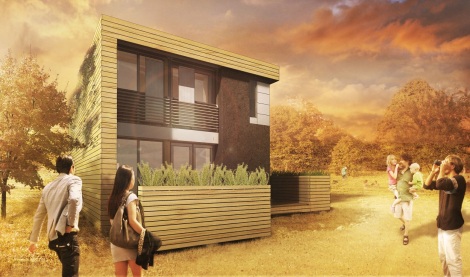 Green is hot on the App State campus

“Green” is hot on US college and university campuses – whether it’s energy efficiency, food composting, LEED-certified dorms and buildings, or deep-green curriculum. Appalachian State is no stranger to the green scene. In 2009 it was named one of the 10 Coolest Green Schools by the Sierra Club, among 162 institutions that competed.  It has appeared in all five editions of The Princeton Review’s Guide to 332 Green Colleges,  produced in collaboration with the US Green Building Council.

Appalachian State first competed in the 2011 US Solar Decathlon in Washington DC with “the Solar Homestead,” a net-zero energy house selected as “People’s Choice” by public vote on-site and online.  Proving that the team and mentors are business savvy, App State reached an agreement with Deltec Homes  (NC) following the Decathlon for an updated version of  Solar Homestead to be  available as a panelized residential building system that can be shipped for final assembly at the job site.

Appalachian State and Université d’ Angers are old friends in the academic world: they have participated in student and faculty exchanges for 30 years. Just 90 minutes from Paris, the city of Angers is a UNESCO World Heritage site.  The “School of Angers” was already a scholarly institution in the 10th century (yes, 1000 years ago)  and by 1450, it had colleges in law, the arts and medicine! In 1971, all of the preexisting institutes, colleges and schools were federated to form the present Université d’Angers, with 19,000 students on three campuses and two branches. Check out Angers university

The Appalachian State/Angers Solar Decathlon house is actually two stories in one:

We’ll look at both.

Trucks containing Maison Reciprocite are on their way from Antwerp, Belgium, to Versailles

Six 40-foot modules that comprise Maison Reciprocity (Maison Réciprocité) were loaded onto a cargo ship in early May bound for Europe,  and ultimately by flatbed trailer for reassembly on the grounds of the Chateau of Versailles (home of Louis XIV, the Sun King)  – a site called Cité du Soleil. Students from both schools are involved in the reassembly, landscaping and final touches.

Getting there first required the two universities to figure out how to bridge the distance and create a working partnership for a successful application for the competition.  Then, each had to take the blueprint and create a workplan. Each partner has specific strengths in such areas as design, renewable energy, landscape, marketing, communications and local know-how.

Here’s where coordinated planning – and weekly Skype teleconferencing sessions – gave faculty and students the path for moving ahead. 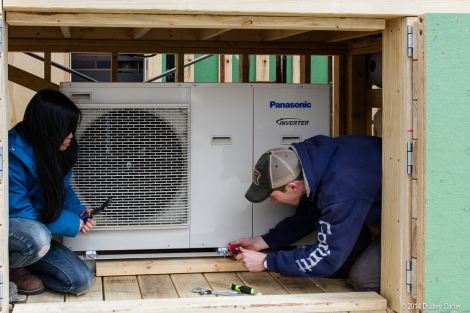 Appalachian’s faculty project director Jamie Russell notes: “We tried to broaden that net as wide as we could,” commenting on the student involvement in the project. “A graphic design class worked on an iPad app for us. Another graphic design class developed our logo.  Grad students from the physics department created, designed and built our entire control system. We had students from across campus working on the project.”

Brainpower and muscle – at work on Maison Reciprocity

Student communications manager Mark Bridges calls the Angers partnership “a beneficial relationship.”  Angers’ students have been working on the Maison’s living green wall, landscaping, gastronomy (there’s a cooking contest in the competition) bilingual signage and communications materials (French/English). They have been essential in understanding the French electrical code so that Maison Réciprocité works under both codes.  Angers and Appalachian State students will team up to lead tours – in French and English — for the public during the competition.  Check out the team (US and France)

What if… reimagining the urban townhouse

Maison Réciprocité is a 1200 square foot, two story prototype (3 bedroom, 2 bath)  that has to be a  standout in 10 different juried contests – from architectural design to preparing a meal using solar-powered appliances – but its conceptual framework is larger and more ambitious.

Faculty director Jamie Russell: “Maison Reciprocity is a very urban design. It’s meant to be a three- or four-story row house that would be packed into a fairly dense urban situation, with two stories of living space, an open terrace roof and one floor of commercial space.”

Imagine a block of these houses in East Baltimore, Philadelphia, or Boston’s Roxbury neighborhood,  where infill development and revitalization corridors could benefit from affordable, adaptable and highly energy efficient design.

“Our French partners also are working to sell the house to a social housing company as a demonstration or exhibition unit,” Jamie Russell said.

Technically speaking, the house has three components, as described on the team’s web site:

Read more about Appalachian State and its Solar Powered House

Link to Maison’s Facebook Page and a cool video

Link to the 2014 European  Solar Decathlon

Green News Update has covered the Solar Decathlons in Spain, China and the US over the past few years. Here are links to our coverage in 2012 and 2013.

2013 U.S. Solar Decathlon— the waiting is over!  Proving that the Solar Decathlon has become a world competition, Team Austria and the AIR House from Czech Republic swept first and third place when all the contests were tallied, with the University of Nevada at Las Vegas in second place. Full story

You can follow the 2014 European Solar Decathlon June 28-July 14 competition through the Green News Update website and our direct links to the competition. Come back and visit!