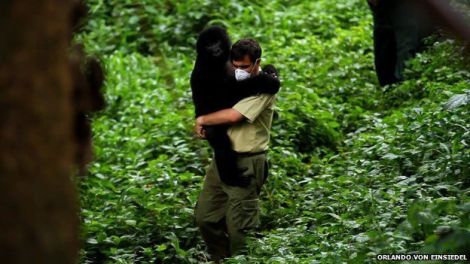 Sometimes your life is on the line – that’s the case for Ranger Andre Bauma, his boss Emmanuel de Merode, and all the caretakers and vets whose efforts to protect the Congo’s mountain gorillas in Virunga National Park place them in harm’s way from any number of opponents, including poachers, armed militias and companies that want access to Virunga’s  natural resources. Virunga is on the frontline of demand for minerals, oil exploration, trafficked animals, and local resources such as charcoal.  You could say it’s only the conservationists, “gorilla doctors” and rangers standing between the demand and the extinction of these great apes. 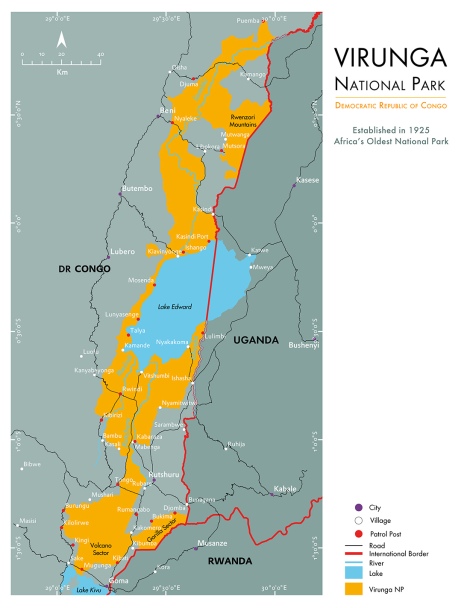 Africa’s oldest national park, Virunga is a UNESCO world heritage site in the eastern part of the Democratic Republic of Congo, some 7800 square kilometers (3000 square miles) with forests, savannas, swamps, active volcanoes, and the Rwenzori mountains. 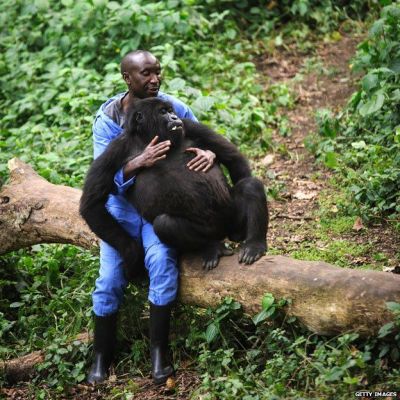 Andre Bauma who is mother and father to four orphan gorillas. Photo courtesy of Getty

The park is best known for its critically endangered population of mountain gorillas (about one-quarter of the world population) but there’s an abundance of biodiversity: forest and savanna elephants, lions, hippos, monkeys, okapi, warthog, topi, and rare bird species. Surprise: there are two other taxa of great apes elsewhere in the park: the Grauer’s gorillas and chimpanzees. That makes Virunga unique: the world’s only park with three taxa of great apes. 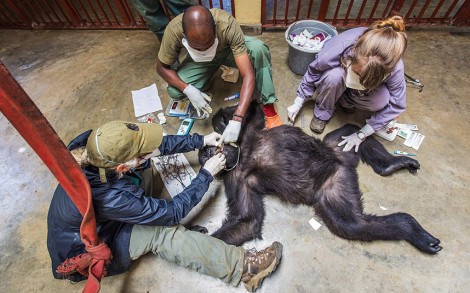 The dangers are well documented, in the highly praised, feature-length documentary Virunga, by Orlando von Einsiedel, who filmed there for nearly a year in 2011-12; and an investigative piece by Britain’s Telegraph (written by Martin Fletcher). There is ample evidence of the real threats to the gorillas – and to the people who want to protect them. Some 150 local rangers have been killed in Virunga. De Merode, a Belgian conservationist who is the park’s director, was nearly killed, seriously injured by AK-47  gunfire while traveling on the route to the park  from Goma.

What makes people risk their own lives for the welfare of wild animals ? At Virunga, the  Senkwekwe Orphan Mountain Gorilla Center at park headquarters in Rumangabo is a refuge within the park for baby gorillas injured in snares or traumatized by witnessing their mothers’ death by poachers and others. It’s the only facility in the world for these critically endangered orphans. Here’s where these babies go to be medically cared for and “mothered” by committed human caretakers. The gorillas live in a large forested enclosure; there’s  veterinary facilities and a safe sleeping house for the night-time. (Watch the videos) 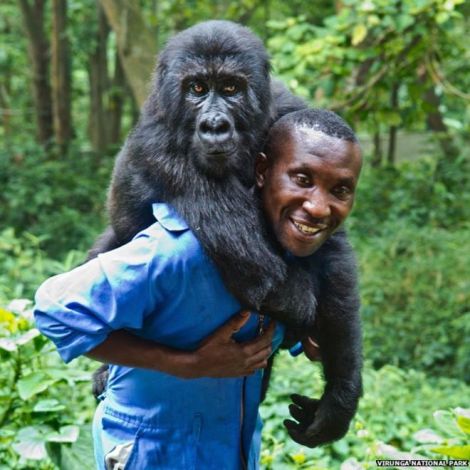 Andre Bauma carrying one of his four rescued mountain gorillas. Courtesy of Getty

The Virunga documentary showcases the efforts of Andre Bauma, a local caretaker, at Senkwekwe,  who has spent more than seven years raising a band of four young gorillas orphaned as infants. Andre has his own human family; and he is “mother” to the four gorilla orphans now growing toward adolescence.

When the M23 militia posed a direct threat to the park and gorilla center, Bauma chose to stay with his animals. “I felt obliged to stay with the gorillas here,” Bauma says in a BBC World Service story.

“You must justify why you are on this earth – gorillas justify why I am here, they are my life. So if it is about dying, I will die for the gorillas.”

Other rangers and caretakers at Virunga are no less committed. This is a tight-knit “band of brothers and sisters” who are risking all for these apes.

Saving a species – one gorilla at a time.

Here’s what you can do

See the Virunga documentary, which has won 23 international awards including AFI’s Best of Fest in 2014 and a 2015 Academy Award nomination for Best Documentary.

Learn about the orphan gorillas

The Gorilla Doctors is powered by the nonprofit Mountain Gorilla Veterinary Project, Inc. and the UC Davis Wildlife Health Center and is directed by Dr. Mike Cranfield and Dr. Kirsten Gilardi.