Students at Stevens Institute of Technology in Hoboken NJ are crowing about their October 18 win at the 2015 US Department of Energy’s Solar Decathlon – they won first place for their solar-powered house among 16 top collegiate teams competing for the prize. Even better than the prize: they came up with SURE, a house design and renewable energy systems intended to withstand “the realities of a changing, more extreme climate.” It’s a house for our time – with many coastal communities facing a future that includes erosion, rising seas, and more severe storms. 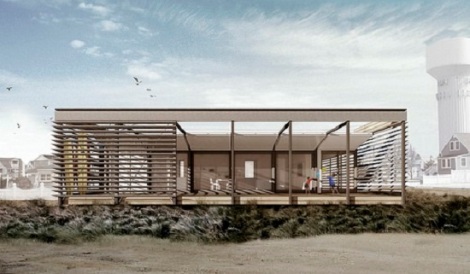 Front of the SURE House (Courtesy of Stevens Institute of Technology)

The Solar Decathlon has been around since 2002, and now includes Decathlon events in Europe and China – with another coming soon in Latin America. Teams selected as competitors spend two years planning, designing, engineering, specifying and building a solar-powered home that meets the criteria set out by the US Department of Energy. (See bottom of our story for links to the Decathlons in Europe, China and earlier US contests.)

“The SURE (sustainable + resilient) HOUSE, a high-performance, solar-powered house that is armored against extreme weather and can provide emergency power in the aftermath of a storm—packaged as a comfortable, beautiful shore house.”

Why the judges loved SURE house (text from our friends at Stevens):

Check out the video, photo gallery, and web site

The 7th U.S. Department of Energy Solar Decathlon in Orange, California, featured 16 university/technical school teams from the US, Central America, Singapore, Germany, and Rome that built solar-powered homes to compete for the big prize. The teams and their houses were put through the paces (design, energy efficiency, household functions such as cooking and laundry) in 10 different contests.  Here’s your portal to the 2015 Decathlon

How Teams Competed – The Lineup

For the U.S. Department of Energy Solar Decathlon, collegiate teams devote two years to designing and building energy-efficient houses powered by the sun. In the final competition, the teams and their houses go head to head in 10 contests to determine an overall winner.

The winning team produced a house that:

Nate St. John of University at Buffalo The State University of New York works on a crawler as the team’s deck moves closer to completion on Day 7 (photo credit: Thomas Kelsey, US Dept of Energy Solar Decathlon) 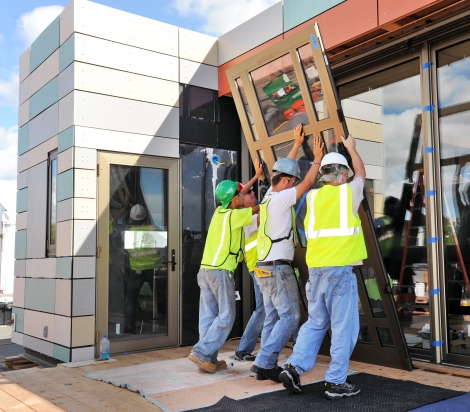 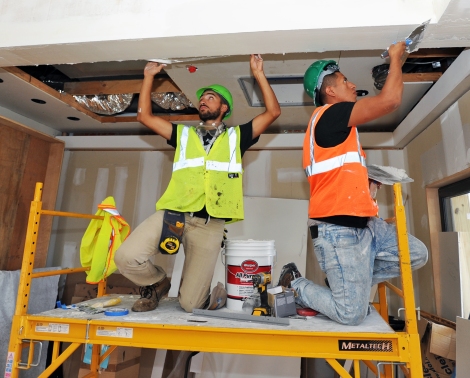 Green News Update has been following the Solar Decathlon since 2005. Here are some of our stories about the competition and the teams — and what everyone learned from this intense, inspiring project.