Is there a way to summarize the prodigious talents – and gifts – of Alexander Von Humboldt, a man whose 100th birth in 1869 was celebrated in cities all over the world (New York, Boston, Chicago, Baltimore, Dresden, Melbourne and Moscow) and who, today, is largely unknown by everyone but scholarly historians and scientists? Elizabeth Kolbert, the estimable New Yorker writer and author of multiple books, puts it this way:

“ Humboldt was… the Edmund Hillary of his generation [for climbing Chimborazo at 19,400 feet]. He was also a naturalist, an inventor, a prolific author, and a republican, in the French Revolutionary sense of the word. Several of his books became international best-sellers. Humboldt’s writings on his adventures in South America inspired figures as diverse as Charles Darwin and Simón Bolívar, who called him the ‘discoverer of the New World.’ As one of his translators put it, ‘It would need another Humboldt to encompass such a life and its works.’ 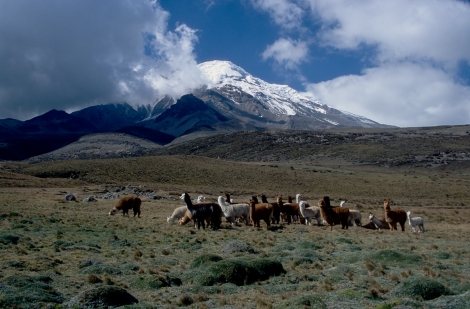 Mount Chimborazo. Von Humboldt climbed to an elevation of over 19,000 feet! Courtesy of wikipedia

Humboldt spent five years in South America — in some of Venezuela’s remotest and problematic places: the Llanos (a biodiversity-rich spot I have traveled to), the Rio Apure and the Orinoco; to Havana; and later to Cartagena (now Colombia), trekking across the Andes, on to Quito and finally climbing Chimborazo. He measured everything (even after his 42 crates of instruments dwindled). He collected thousands of plant specimens. His notes and writings eventually filled 34-volume publication; he paid a small fortune to have artists illustrate and engrave his works. And he charged a small fortune for the books.

Andrea Wulf is an endless well of enthusiasm and scholarship – see her mini-video on the book – on Von Humboldt. She did an estimable job in her book Founding Gardeners: The Revolutionary Generation, Nature and the Shaping of the American Nation, which chronicled the agrarian instincts and interests of George Washington, Thomas Jefferson, and James Madison.  Her ability to tackle the nation’s most important founders in one work qualifies her for taking on the herculean life of Von Humboldt, warts and all. Darwin called him the “greatest scientific traveler who ever lived.” Read the book, and you’ll see why! Essay by Elizabeth Kolbert Humboldt’s Gift (New Yorker Oct 26, 2015). Andrea Wulf on the Diane Rehm Show (NPR)

Lost Art of Finding our Way, John Huth. (Belknap Press, Harvard University). Hardcover 544 pp illus $35.
Can you get to your destination– whether by land or on water– using the rudiments of analogue way-finding (sun, stars, tides, weather, wind)  ? Harvard experimental particle physicist John Huth – he helped find the top quark and Higgs boson! — thinks there’s a better way than relying on GPR. After all, in a disaster, attack or major grid outage (see Ted Koppel’s new book on that topic), your GPS would probably be worthless.

As Nature magazine points out: “Humanity’s lust for exploring terra incognita shaped and tested our prodigious capacity for mental mapping. Now, with the advent of the Global Positioning System, wayfaring skills are on the wane. Physicist John Edward Huth turns explorer in this rich, wide-ranging and lucidly illustrated primer on how to find yourself in the middle of somewhere. Huth’s prescription for navigating fog, darkness, open ocean, thick forests or unknown terrain rests first on harnessing compass, Sun and stars; then on the subtleties of weather forecasting and decoding markers such as the wind, waves and tides.”

Greg Miller at Wired says, “It’s a great reference, filled with personal and historical anecdotes and fascinating bits of physics, astronomy, oceanography, and meteorology. And that’s one of Huth’s central points: To find your way in a world without maps, you can’t rely on any single cue—you need to make the best of whatever combination of cues is available to you… With a little study, The Lost Art of Finding Our Way could be your guide to reconnecting with the navigational aids in the world around you.” Read The
New Yorker Review 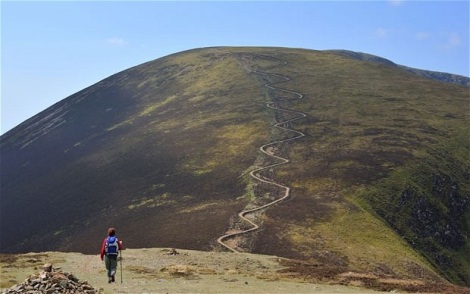 The Old Ways: A Journey on Foot, Robert Macfarlane. (Hamish Hamilton 2012 ) Hardcover. 433 pages
Is Oxford University the incubator for people with literary yearings? Macfarlane is an Oxford Don with several well-received books under his belt (Mountains of the Mind and Wild Places). This book – called by the Guardian “an utterly beautiful and brilliantly written travel book”—is considered a continuation of how he explored the feral in modern Britain.

Chapters are organized by geological features: Chalk, Silt, Peat, Roots and Flint. Here you’ll find his delight in ancient roads, including old seapaths and ocean roads leading to Iceland and Norway, and “a branch line of the most famous pilgrimage route of them all, the Camino de Santiago.” If you heart stirs at the prospect of a writer with the deep belief “that an outward expedition is the occasion for an inward voyage,” you’ll enjoy how Macfarland keeps company with the past, with history, with his considerable knowledge of nature, as well as an assortment of wanderers, pilgrims and ghosts.  Awards and honors: Orion Book Award Nominee (2013), Dolman Travel Book of the Year Award (2013) Guardian review and  Video

This book will transport you to a way of life that few of us could imagine — a family whose traditions have played out in fields, hills and villages between the Lake District and the Pennines for hundreds of years. If you visit the Lake District as a traveler or tourist, you think of it as “a landscape of the imagination,” that attracted poets and artists. In the Rebanks family, and about 300 other families, sheepherding is a bone-deep tradition, a connection to the land and the revelation “we are each tiny parts of something enduring, something that feels solid, real, and true.”

The New York Times reviewer says, “ Inspired partly by W. H. Hudson’s classic account of rural life, “A Shepherd’s Life” (1910), his book is, at once, a memoir, a portrait of his family’s world and an evocative depiction of his vocation as a shepherd — work subject to the vagaries of weather and luck and based on generations-old knowledge of breeding and tending to sheep. “ Rebanks is an Oxford grad who came home to follow the path of his father and grandfather before him to experience the rituals, the trials and yes, the pleasures of being part of something larger and, one hopes, more enduring, than any of us could imagine. Watch the video with Rebanks for a special treat. Great video   New York Times review 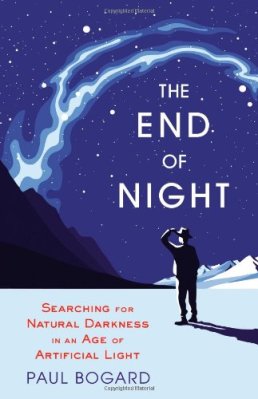 The End of Night

The End of Night: Searching for Natural Darkness in an Age of Artificial Light, Paul Bogard. (Little. Brown) 325 pp $27

This is about a different kind of quest– one that humans today will be hard pressed to satisfy. For millions of years the planet was shrouded in natural darkness – life after dark was illuminated by moonlight, and reflected from stars. Today it takes a serious quest to find complete darkness as a vantage point for stargazing. Paul Bogard has conducted that search to find dark places around the world – and it is a challenge. Along the way, you’ll learn about Las Vegas’s Luxor Beam — the brightest single spot on this planet. It’s made up of 39 individual 7,000 watt bulbs situated on the ground in a room around fifty feet below the top point of a pyramid. That Paris has its own lighting designer – Franҫois Jousse– who determines the amount of illumination on the city’s landmarks and streets ? That overlighting is unnatural and unhealthy for humans and animals, causing millions of bird strikes and interrupting Circadian rhythms? Travel with Bogard to learn about the natural history, science and history of “darkness” and how we might regain a healthier balance. Radio interviews with Bogard 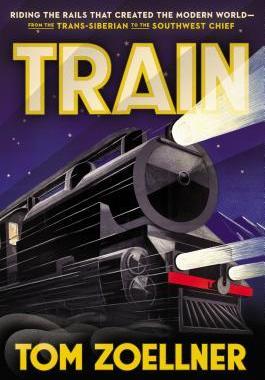 Riding the Rails That Created the Modern World — From the Trans-Siberian to the Southwest Chief, Tom Zoellner. (Viking) 346 pp $27.95.

Did you know the more than 100 million people worldwide ride a train every day ? The romance of train travel has largely disappeared in the workaday world – other than the rich experiences of the Orient Express (London to Istanbul, thousands of euros!) or the Blue Train (from Pretoria to Capetown South Africa)

Zoellner shares his rail adventures –in America, India, Spain, Russia, Britain, China and the Peruvian Andes—and there’s plenty of early history in how the “the world’s first true railroad,” the Stockton & Darlington line, which premiered on Sept. 27, 1825 with carloads of coal, cargo and workmen, and then how the idea spread. One of his best trips is the New York to Los Angeles journey using the Cardinal to Chicago and the Southwest Chief to LA. Sadly, the US has little to stand up to the TGV (France) which can whisk you from Paris to Switzerland or to Strasbourg in a flash (so to speak) or the high-speed services in Spain, China and Japan. Those stories may wait for another day. Zoellner captures the imagination with this inviting travelog. New York Times review Video  and web site

The Nile A Journey Downriver through Egypt’s Past and Present, Toby Wilkinson. (Knopf 2014) 292 pp $27.95 “Travelling no faster than the current itself,” Wilkinson writes, “you can witness every era of Egypt’s long history — pharaonic, Greek, Roman, Byzantine, Islamic, colonial and contemporary — unfold before your eyes like the petals of a water lily.” Egyptologist Toby Wilkinson shares the life-giving force that is the Nile – surrounded by unforgiving desert – from Aswan to rural areas and on to the teeming city of Cairo.

You’ll learn about grave robbers (as early as 1150 BC), inept archeologists who used dynamite to excavate their finds, typical examples of village life, and surprisingly little on the contemporary political situation. Two good reviews: NYJournal of Books and Washington Post

For a different take, try the 2010 The Black Nile: One man’s amazing journey through peace and war on the world’s longest river, by Dan Morrison (Viking) 307 pp. $26.95  More than a 21st-century update of the classic works by Alan Moorehead covering the epic 4,000 miles from the source (Jinja on Lake Victoria) to the Mediterranean, “ The Black Nile gives a snapshot of ordinary life in the hamlets and villages along the waterway, lives shaped by hardship…. The description of the resulting journey is interwoven with recent history, gritty, no-nonsense observations and a cast of vivid characters.” Washington Post review Read an excerpt

If you look down  and about frequently while in Rome, you’ll find the acronym SPQR –“Senatus Populusque Romanus,” or “The Senate and People of Rome”—imprinted everywhere, on manhole covers, roads (and wall markings). Beard’s book is an ample chunk of history that can make your own explorations of Rome that much richer. In a recent TIME interview, Cambridge University classicist Beard notes, “The Romans would not have understood the concept of an illegal migrant. …the underpinning of Rome in its foundation myths [is] as a place of asylum: Aeneas is a war refugee, Romulus has no citizens, so he says, ‘Come on, everybody! Runaways, criminals, ex-slaves, you just come here, this is an asylum!’” Thus she bookends millennia with an observation that pertains to how today’s migrants are coming from former Roman outposts into contemporary Mediterranean society that was once part of Rome. There’s so much to learn from the nearly 1,000 years she covers and in a fresh way. TIME interview

In our 2014 list of “Best of the Best,” we recommended Robert Hughes’s promethean Rome: A Cultural, Visual and Personal History, (originally hardcover, Alfred A Knopf) Now in paperback
A powerhouse art critic (formerly Time Magazine) and prolific writer, Hughes has written a biography of the city – once the center of the “civilized” world – with all of its spectacle, intrigue and physical beauty. Read more in our Green News Update article from 2014

♦ Looking for more books that take you on an adventure, an exploration of different worlds, and travel beyond the everyday? Check out our 2014 Gift Books — from a compendium of sacred places to women’s unique adventures.