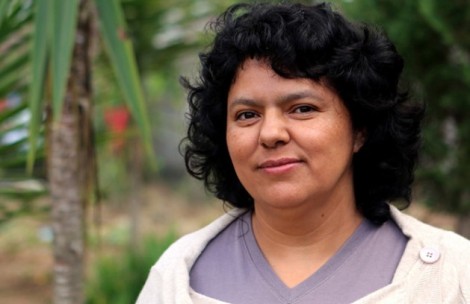 This is heartbreaking news! Environmental activist Berta Cáceres – who defied the government of Honduras  for the land rights of indigenous people—was laid to rest on March 7 after being gunned down inside her home, in La Esperanza, Honduras, about 110 miles west of the country’s capital of Tegucigalpa. In 2015 we featured Cáceres  on Green News Update as one of the 2015 Goldman Environmental Prize Award winners.

Berta Cáceres gave her life to fight for the Lenca people of the Rio Blanco – a river she said was protected by female spirits – to prevent the government from proceeding with plans to build the Agua Zarca cascade of four giant dams in the sacred Gualcarque River basin, a joint project of Honduran company Desarrollos Energéticos SA (DESA) and Chinese state-owned Sinohydro, the world’s largest dam developer. All told there were 47 dam projects approved by the government, “without the informed consent of the people,” she said.  “I could feel what the river was telling me.”

She cofounded COPINH (Council of Indigenous Peoples of Honduras)  to protest various schemes to earmark the land for mining concessions by granting contracts for hydroelectric dams to provide cheap power, according to Treehugger. COPINH conducted a series of peaceful demonstrations and roadblocks. Ultimately the campaign succeeded, and Sinohydro left the project.  But, she said, “it cost us in blood.” She was referring to the death of Tomás García, cofounder of COPINH who was shot during a peaceful demonstration. And Berta claimed,  there were others too.

Watch this  Goldman Prize video from 2015 to learn about Berta Cáceres and the calling she gave her life for.

Keep Berta Cáceres in your heart and demand justice for those who murdered her. One of her compadres said,