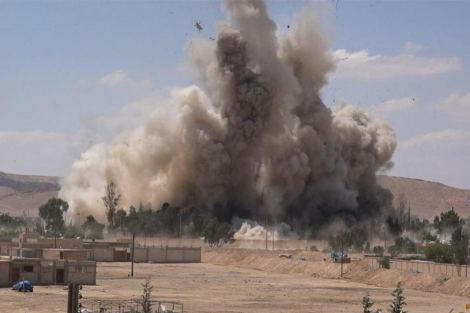 The destruction of Palmyra

Palmyra, Syria: It’s a front-page story in the New York Times (April 5) and an online photo essay of how the ancient city’s archeological treasures, the remnants of a 2000 year old civilization – made up of Roman, Persian and other local cultures – have been destroyed by ISIS, through willful destruction and by looting by all sides of this war.

A file picture taken on March 14, 2014 shows a partial view of the theatre at the ancient oasis city of Palmyra, 215 kilometres northeast of Damascus. Islamic State group fighters advanced to the gates of ancient Palmyra on May 14, 2015, raising fears the Syrian world heritage site could face destruction of the kind the jihadists have already wreaked in Iraq. AFP PHOTO / JOSEPH EIDJOSEPH EID/AFP/Getty Images

Palmyra is a UNESCO World Heritage Site, recognized for an exceptional amphitheater, triumphal arches, the Lion of al-Lat which sat at the entrance to the Palmyra Museum.  Whether smashed by hand or leveled by explosions carried out by the Islamic state, many of the beautiful remnants of past civilizations are reduced to shards. The amphitheater  from the second century a.d. century  still remains (and so too the museum!)  pock-marked by rounds of bullets, said to be the site where mass executions took place.

Site of Palmyra pre-destruction of its famed triumphal arches. Courtesy of UNESCO, all rights reserved.

Photographer Bryan Denton  traveled there with a Hezbollah escort and created this record of ruin. It’s war photography of a different sort, but essential.

Go to the UNESCO web site for a gallery of what the archeological sites and treasures of Palmyra looked like before their destruction.

The destruction characterized by one Syria militiaman as the “ruins have been ruined.” A loss not just for Syria but for the world.

In this image made from a militant video posted on YouTube on Friday, April 3, 2015, which has been verified and is consistent with other AP reporting, a piece falls off from a curved face on the wall of an ancient building as a militant hammers it in Hatra, a large fortified city recognized as a UNESCO World Heritage site, 110 kilometers (68 miles) southwest of Mosul, Iraq. (AP Photo/Militant video)

In a future story, Green News Update will look at the spiral of destruction and looting of ancient sites and archeological museums in the Middle East, from the destruction of the massive Bamiyan Buddhas by the Taliban in 2001 to Iraq and Syria.