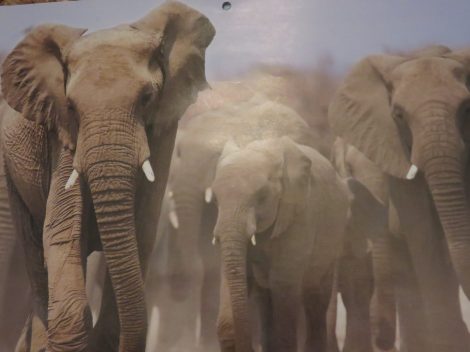 A complete worldwide ban on ALL ivory sales –including so-called “legal” ivory –is what former Secretary of State James A. Baker III calls for in a Washington Post op-ed.  Readers and followers of Green News Update read what he has to say — you’ll want to take action.

Green News Update has reported multiple times on the ongoing massacre of elephants for their tusks — the ivory that is being trafficked to commercial markets in Asia  (especially China and Japan) and elsewhere. Yes, there is even a market for ivory in the United States!

The darker story is that elephant ivory is being used to generate money for local militias in Africa — such as the Sudanese Janjaweed and Joseph Kony’s Lord’s Resistance Army– to buy weapons and supplies for their terrorist activities.

Forest elephants in the Congo. Courtesy of Wildlife Conservation Society

How can you help?

September 17 to Oct 5, the 17th meeting of the Conference of the Parties to CITES (CoP17) — a worldwide convention to protect endangered animals and plants —  will meet in Johannesburg, South Africa. Conservation leaders from most countries will discuss among other things, what to do about the trade in wildlife parts from elephants, tigers, rhinos. You can write to the delegates and tell them we must stop the trade in ivory. It’s easy — here’s the link

Send a simple message– SHUT DOWN ALL OF THE DOMESTIC MARKETS and stop the killing.

96 elephants are killed every day in Africa. Without your help, the killing will go on until elephants become extinct in the wild.

What else can you do ?

As Secretary Baker reminds us in his OP-ED:

“Since the dawn of human civilization, these magnificent, awe-inspiring creatures have been with us. Let us not be the ones who let them disappear forever on our watch.”