Still photo from the new documentary The Ivory Game (2016)

Coming up: The Environmental Film Festival in the Nation’s Capital—March 14-26—presents over 150 films in Washington, DC area locations as wide-ranging as museums, embassies, universities and local theatres. Don’t miss this opportunity to see the films – some of them world premieres – often low-cost or free of charge. Many include after-screening discussions and social events with filmmakers. Founded in 1993, the DCEFF is the longest-running enviro film festival in the U.S.

Here’s your chance to experience incredible cinematography, learn facts that will move you, listen to messages that inspire you to do something to protect the big blue marble — our only home.

Trailers from several of the featured films: 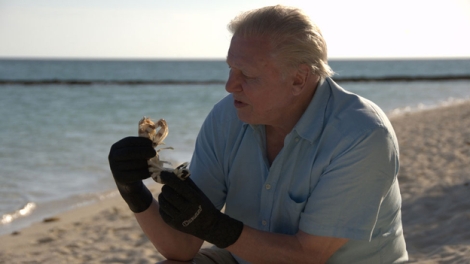 Can wildlife survive – or even thrive – in urban areas, the fastest-growing habitat in the world. The BBC series, successor to Planet Earth I (2006) features leopards in Mumbai, peregrine falcons in New York, starlings dancing over Rome. Is there a home in cities for animals losing their habitats? Planet Earth II is a 6-part series, exceptional photography and narration by the redoubtable David Attenborough. New York Times review

Before the Flood (Award winner)

The National Geographic documentary features Leonardo DiCaprio as a United Nations Messenger of Peace, traveling to five continents and the Arctic to witness climate change firsthand. Do you want to see the threats and the know the truth? New York Times review

Trailer for Before the Flood

Directors Jacques Perrin, Jacques Cluzaud of the beloved documentary Winged Migration have done it again: exceptional photography of animals in the wild and beautiful soundscape as they look at the shared history of humans and the natural world. New York Times review

Check out full lineup of films at this year’s Environmental Film Festival.