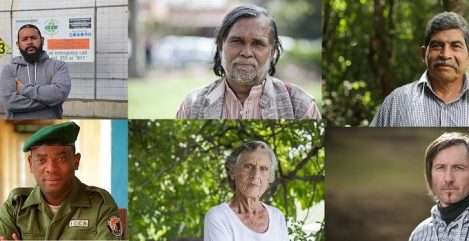 “…for sustained and significant efforts to protect and enhance the natural environment, often at great personal risk.”

mark! Lopez, United States: Born and raised in a family of community activists, mark! Lopez persuaded the state of California to provide comprehensive lead testing and cleanup of East Los Angeles homes contaminated by a battery smelter that had polluted the community for over three decades.

Uroš Macerl, Slovenia: Uroš Macerl, an organic farmer from Slovenia, successfully stopped a cement kiln from co-incinerating petcoke with hazardous industrial waste by rallying legal support from fellow Eko Krog activists and leveraging his status as the only citizen allowed to challenge the plant’s permits.

Wendy Bowman, Australia: In the midst of an onslaught of coal development in Australia, octogenarian Wendy Bowman stopped a powerful multinational mining company from taking her family farm and protected her community in Hunter Valley from further pollution and environmental destruction.

Rodrigo Tot, Guatemala: An indigenous leader in Guatemala’s Agua Caliente, Rodrigo Tot led his community to a landmark court decision that ordered the government to issue land titles to the Q’eqchi people and kept environmentally destructive nickel mining from expanding into his community.

Rodrigue Katembo, Democratic Republic of Congo: Putting his life on the line, Rodrigue Katembo went undercover to document and release information about bribery and corruption in the quest to drill for oil in Virunga National Park, resulting in public outrage that forced the company to withdraw from the project.

Dig deeper into their stories of courage, bravery, commitment and deep spiritual values to protect the planet and their communities.  Additional information on the 2017 awardees

Our prior stories on Goldman Environmental Prize winners:

Green News Update has shared an abundance of short pieces and articles about Earth Heroes since 2013 – they make appearances throughout the year, not just during Earth Week. Read a selection of our Earth Hero stories from 2013 through 2015.