Boy on bicycle with the daily baguettes. Photograph by Elliott Erwitt.

Imaginez! Some 1200 boulangeries close down every year in France — leaving small towns, city neighborhoods and millions of tourists without their daily baguettes.

Even so, 12 million people daily go into a French boulangerie for a baguette, according to Franck Thomasse, president of Paris’s bakers’ syndicate.

My fondest memories of travel in France include places like Cairanne, Menerbes, Vaison la Romaine, and Paris where we bought breads and baked goods that simply do not exist in the USA, or many other countries. My favorites include pain d’epi (shaped like a stalk of wheat);  pain au chocolat with  squares of luscious dark chocolate melted inside the flaky croissant dough; fougasse forestiere, shaped like a wheat sheaf topped with wild forest mushrooms; and pain au levain, the fabulous boules the size of large exercise balls! 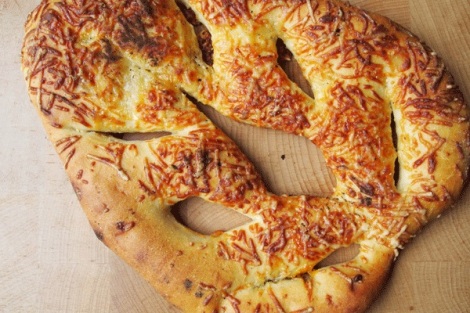 Is there a future for the baguette when sons and daughters of old-line, hard-working bakers decide against spending their nights preparing baguettes for the oven or doling out the starter for the fabulous boules that arrive in the early morning at bakeries all over France?

From the Best of Doisneau Paris. Flammarion. Created by Atelier Doisneau 2014

Yes, a new generation of artisan bakers is at work in Paris and in France– sons of immigrants– who are now toiling at the ovens to feed the French and the tourists their daily baguettes.

You can read about Mahmoud M’seddi, winner of this year’s Grand Prize for Best Parisian Baguette, whose father emigrated to France from Tunisia 30 years ago. M’seddi proclaims his Frenchness ” I’m French. …I grew up here. This is my home,” and he proves it. His bakery is furnishing the Elysee Palace with “the bread of breads” for a year.

Watch the video of M’seddi and read the heartening New York Times story.