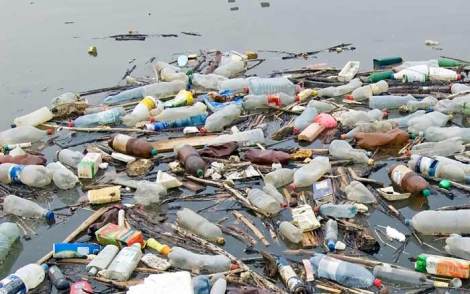 One trillion pieces are already in the oceans and some 8 million tons being added every year. Biologist Sarah-Jeanne Royer says,” [T]he production rate is expected to double over the next two decades. 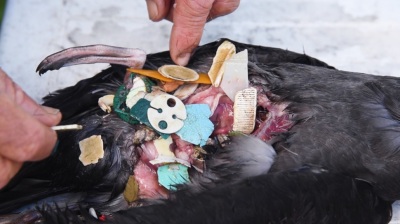 Unseen bits of microplastics run throughout the oceans’ water column – and are being ingested by fish that are eaten by other fish, and by us. “‘More than 800 animal species were contaminated with plastic, an increase of almost 70% since the 1970s,’”according to a 2017 United Nations report.” 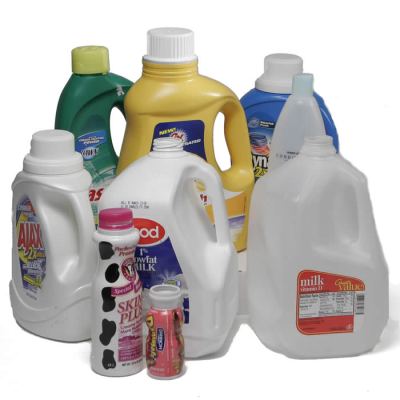 WHAT COMPANIES, RETAILERS & GOVERNMENTS ARE DOING 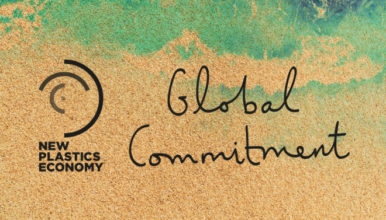 In October 2018, more than 290 brands, retailers, recyclers, governments and NGOs  agreed to a joint vision on reducing and eliminating plastic pollution as signatories of  the New Plastics [Circular]  Economy Global Commitment during the Our Oceans Conference in Bali (October 28, 2018)

The signatories commit that “plastic never becomes waste or pollution.”

“This is the biggest effort ever seen to mobilize a global-scale industrial response, uniting the key actors around the globe behind a common vision for upstream solutions.”

Just as important, “More than 15 financial institutions with in excess of $2.5 trillion in assets under management have also endorsed the Global Commitment and over $200 million has been pledged by five venture capital funds to create a circular economy for plastic.”

Check out the Line in the Sand initiative by the Ellen MacArthur Foundation with the UN Environment Program. Social media hashtag #LineInTheSand,

The EU Strategy for Plastics in a Circular Economy 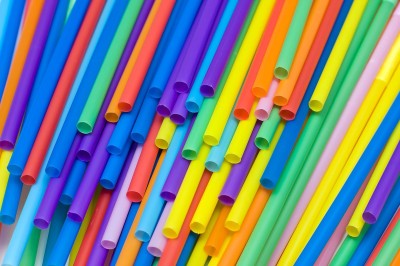 Straws are in your water glass, take-out coffee, iced tea, soda and shakes –whether or not you ask for one. Estimates for the U.S. range from 170 million to 390 million daily – a total of 63 to 142 billion straws a year.  A lot end up in the ocean, being ingested or interfering with marine organisms!  Strong public pressure (through Greenpeace and Change.org petitions) has been effective. Starbucks joins  McDonald’s and the Marriott International Group to eliminate single-use plastics, which follows legislation banning them in states such as Hawaii and California. Read the story

Starbucks says it will stop using disposable plastic straws by 2020, eliminating more than one billion straws a year across its 40,000 retail venues. 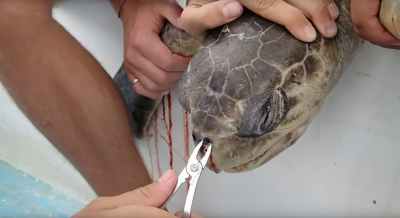 Turtle receiving emergency treatment for straw inhaled in his nose

Strawless In Seattle: In July, the city banned disposable straws from restaurants, cafes and other food service businesses—some 3100 places,  from Starbucks to stadiums. The Lonely Whale Foundation played  a major role with its Strawless in Seattle campaign – now it wants to take the campaign to 10 other cities.

Who’s missing in action? Subway Restaurants, the largest fast-food chain in the US, with 45,000 locations, has NOT yet stepped up to eliminate straws.  Consumer voices are needed (see the petition) to tell them to end plastic straw waste. (Subway’s  enviro leadership in other areas is quite good.)

Global momentum has built in recent months to ban plastic straws and replace them with biodegradable ones, in part thanks to numerous social media campaigns using hashtags like #StrawsSuck and #TheLastStraw. 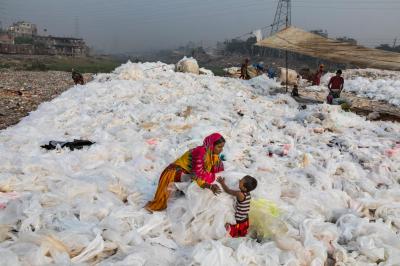 Plastic Bags:  The largest US grocery chain–with a total of 2800 stores — Kroger Co. plans to eliminate single-use  plastic shopping bags from its supermarkets  in 35 states–63-store QFC chain in the Pacific Northwest next year and from all Kroger-owned stores by 2025. Kroger owns Harris Teeter, Fred Meyer and Ralphs. 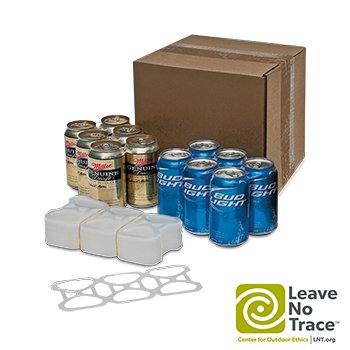 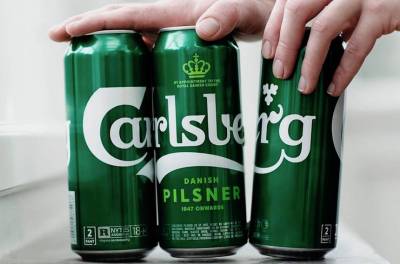 Carlsberg tried thousands of test combos to come up with this glue that holds six- and eight-packs together. 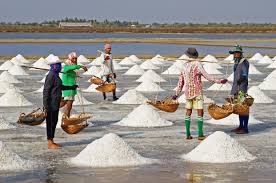 Microplastics: Salt, water and us ! Microplastics are tiny pieces of plastic smaller than 5 millimeters that are formed when bigger items such as plastic cups break down.

More than 90% of salts sold across the world contain microplastics, with the highest levels found in sea salt, a new environmental study found.

The study analyzed 39 salt brands from 21 countries, including the U.S. and China, Greenpeace said, citing a study published in the peer-reviewed Environmental Science & Technology scientific journal. A kilo of sea salt may contain 600 microplastics!

“More than 800 animal species were contaminated with plastic, an increase of almost 70% since the 1970s,”according to a United Nations report.

Humans also may be carrying microplastic bits in their gut! A recent pilot study by Dr. Philipp Schwabi looked at stool samples from people in 8 countries — Finland, Italy, Japan, the Netherlands, Poland, Russia, Britain, and Australia — and found microplastics. Where did it come from ? Food packaging? Tap water? Keep in mind that microplastics can be five times smaller than the thickness of a human hair. Can these bits migrate into the lymph system or our blood? It’s early days– more study is needed. 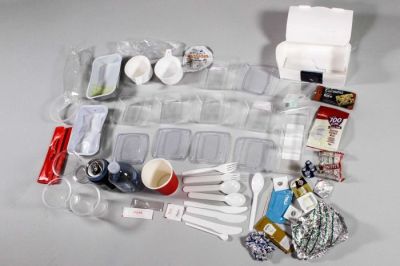 Airline waste is huge, including plastics. The average passenger generates 1.4 kilograms of waste per flight (that’s 3 pounds!) according to the International Air Transport Association (IATA). In 2017, the total amount of passenger waste was 5.7 million tons, IATA says.  Some of it is from the toilets, mostly it’s cardboard and plastic.

Other airlines, such as Fiji Airways and Thai Airways, have pledged to significantly reduce single-use plastic onboard their fleets in 2018; Ryanair claims it will be “plastic free” by 2023. 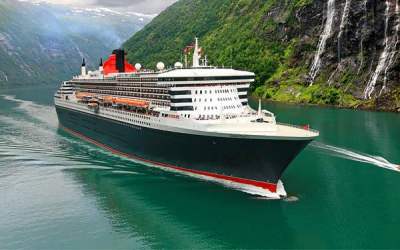 Cruise companies: P & O, Cunard and Royal Caribbean –have announced limits on plastic straws, bottles and packaging aboard their ships, while Carnival will stop placing straws in glasses automatically, but won’t outright ban them. 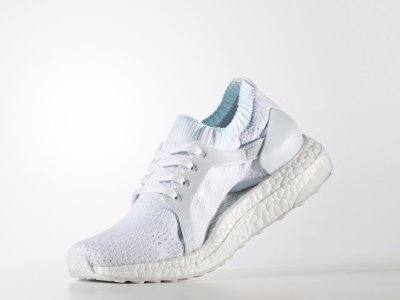 Adidas: Polyester plastic is used in about 50% of Adidas products. And if you consider the number of shoes and clothes the company makes, that’s a lot of plastic. Here’s what they’re doing – and their future commitments.  No more plastic bags in their stores (2016). They have produced shoes from recycled water bottles ( 1 million pairs in 2017). Now they’re starting to phase out “new plastic” to make their  shoes  (end of 2018). By 2024, the company will only userecycled polyester for all of their products!

Where’s NIKE ? It’s the world’s largest sportswear produce, but not on the record to reduce its plastic footprint.

You love the feel and warmth of your hoodie or fleece jacket, but did you know that a single fleece jacket can shed up to 250,000 microfibers (that’s plastic) in a single washing ? See the Patagonia-Bren study 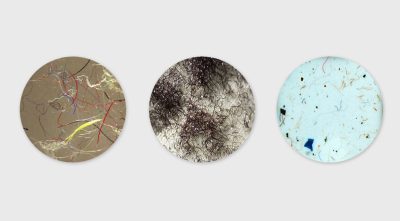 Microfibers from clothing. Courtesy of Microfiber blog and Patagonia 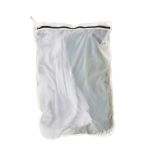 The Patagonia guppy friend! You put your synthetic microfiber hoodie in here to wash it, and fibers don’t leak out into the wastewater.

Patagonia says, “ Washing machines represent an integral step in the path to pollution,” by sending microplastics into waterways. They urge consumers to put filters on the wastewater pipes that take wash water from the machine to the drain, or install a filtration system. What’s the deal with North Face? They need to eliminate microfibers by substituting another fiber. Learn more from Patagonia.

45 million people in the US wear contact lenses – and many are single-use lenses  that  can be thrown away after a day or a week. Guess what!

A study by Arizona State University students found that an estimated 15-20% of wearers  throw the lenses down the sink or toilet. It could add up to 6-10 tons of plastic in wastewater every year—with the threat to aquatic life, especially bottom feeders that may ingest them.   Read the whole story in Science Daily 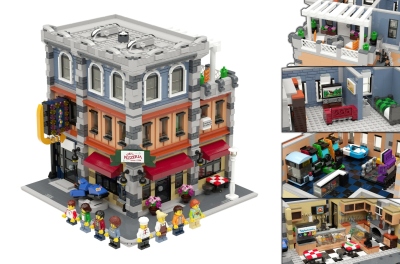 Playthings with Plastic:  Billions of Legos  occupy floor and table space in homes and apartments worldwide. And each day about 100 million “elements” — the term Lego uses for its bricks, trees and doll parts  — are churned out in Billup, Denmark  The problem isn’t the packaging, it’s the product itself. 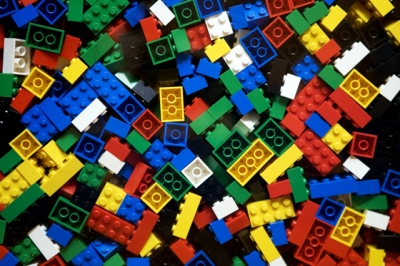 Home furnishings: The worldwide furnishings giant will stop using single-use plastic including straws, cutlery, and drink stirrers in its cafes by 2020.

Hooray for Unilever: While microbeads in cosmetics are just a small part of total marine litter (<0.1%), they can be ingested by marine organisms. There’s no need for plastic microbeads when there are plenty of safer plant substitutes that can be used to exfoliate your face and body.  Unilever stopped using plastic scrub beads in 2014 in response to concerns about the build-up of microplastics in oceans and lakes. Unilever is one of the world’s largest food, cosmetic and personal care corporations. Read more about its commitment to sustainability.

Nurdles. What the hell are they? Unlike microbeads, which are used in consumer products like face scrub, nurdles are lentil-size pellets that are basically the building blocks for creating plastic products. Companies buy nurdles by the billions every year to make nearly all the plastic products we buy.

Nurdles pose significant dangers for wildlife. Marine animals ― including fish, turtles and birds ― mistake the pellets for food, leading them to become malnourished or starved. Below: disastrous nurdle spill in South Africa. 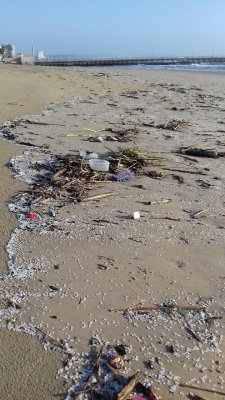 Higher Authority: Governments and the Queen

The UK Plastics Pact: The UK Plastics Pact is a collaborative initiative (with the Ellen MacArthur Foundation)  to create a circular economy for plastics across the entire plastics value chain, with producers, processors, retailers, government and NGOs. The Plastic Pact’s key goals by 2025 include:

A second pact is being developed in Chile in collaboration with TriCiclos, a B Corporation now headquartered in Brazil, whose mission is achieving the triple bottom line of sustainability.

The Royals speak: Queen Elizabeth announced a royal decree in February 2018: plastic straws and bottles are banned from all royal estates, as well as their cafes and gift shops!  The royals also pledge to reduce single-use plastics at all of their functions.

Prime Minister Theresa May announced a Britain-wide ban on the sale of plastic straws, stirrers and cotton swabs. She also called on the 52 Commonwealth nations to adopt similar measures.

Britain’s Waitrose – a major food chain – has banned plastic straws; so has the London City Airport, the first UK airport to do so.

Australia’s government set a target for 100% reusable, compostable or recyclable packaging by 2025; the Australian senate recommended a ban on all single-use plastics, including takeout containers, plastic-lined coffee cups, chip packages, and bags — by 2023.

Norway announced in September that it will spend $200 million over the next four years on waste prevention efforts, anticipating a series of commitments that will be revealed at Our Ocean conference, where last year $8 billion was pledged.

As a consumer, homeowner, traveler, voter – you’ve got clout. Consumer power can force companies and stores you buy from to make a clean-oceans vision a reality. Take the pledge to reduce your personal use and help clean up the oceans: it’s jeopardizing marine life, our food supply, and us!

Step up. Your message to manufacturers and retailers–

COMING NEXT: We’ll share stories of innovators in reducing, recycling and eliminating plastics in manufacturing and from the ocean waste stream–many of them Dutch companies and entrepreneurs.