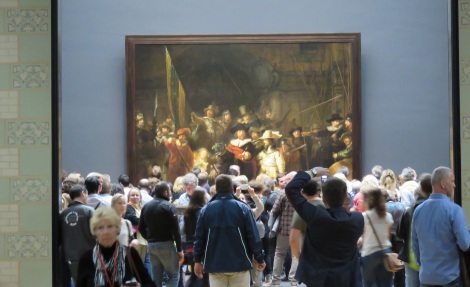 The world’s modern and ancient cities, tropical islands, coveted beaches, mountain retreats, national parks and famed museums – are all tourism magnets.  But fair warning to travelers and sustainability advocates – on every continent, in every season of the year, we have arrived at the age of overtourism.

Our two-part article looks at the facts –who’s traveling, where they’re going, colossal revenues, how it’s affecting neighborhoods, cities, real estate, infrastructure, consumption, public health, and quality of life.  In Part II,  we’ll look at what you, and others, can do to reduce the  impact of travel and tourism on the planet and create a lighter environmental footprint.

Overtourism is ubiquitous – it is everywhere

Try making your way across the Charles Bridge in Prague! It’s a madhouse of activity, day and night. (Photo Roberta Faul-Zeitler, CC 3.0)

We learned firsthand in October during an off-season visit to Prague, in the Czech Republic – the famed Charles Bridge is jammed night and day. The Old Town is a mob scene waiting for the hourly performance of the storied mechanical clock, while tourists stand nearby eating slices of pizza. Crews are on cleanup patrol.   Local walking tour groups – a major income source for the city – crowd every sidewalk and alley.

Recently the Dutch removed the popular “I am Amsterdam” sign. Too many selfies, too much congestion.

The Dutch, so successful at marketing their most popular attractions, have now  reversed course – reducing the number of Airbnb nights, no more guided tours of Amsterdam’s Red Light District and limits on foreigners smoking marijuana – to stem the tide (an estimated 42 million tourists annually will hit the Netherlands by 2030). For the Dutch it’s a livability issue for a nation with only 17 million residents!

Thousands of Airbnb conversions are transforming Barcelona’s homes and apartments in older, stable neighborhoods near the beloved Rambla, into often-raucous quarters for partying by out-of-country-visitors  (New Yorker article)

Symphony of the Seas Courtesy wikipedia

Ports and coastal cities (from Macau to Venice) are overwhelmed by towering cruise ships.  The Symphony of the Seas—the world’s largest passenger ship–is the height of a 23-story office tower and over three football fields in length ; it carries over 5,500 passengers.  Try to imagine the raw materials, water use, food consumption and human waste of operating a full passenger load!

Climate change and catastrophic events don’t seem to stanch the flow.  Tourists were injured and killed in December 2019 on White Island, a popular tourist destination 30 miles off the New Zealand Coast, by a volcanic eruption, despite warnings of increased volcanic activity just weeks before. See the video

Photographer Marco Panzetti captured severe flooding in November 2019 in Venice: While high water damaged hotels and destroyed businesses, tourists waded through to survey the scene—despite smelly water that included raw sewage. He said in a Slate interview:  “Tourists are enjoying the high tide, and the floods, very much. It’s picturesque….Visually, it’s beautiful. For tourists, it’s another attraction. Tourists don’t realize what a disaster it can be for local people. “ 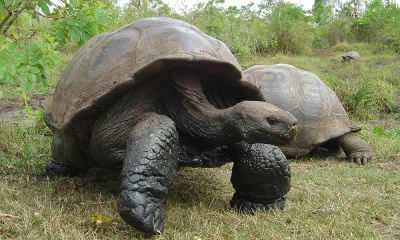 Half a world away, rare and endangered species on the Galapagos Islands have to contend with over 240,000 visitors a year–one of the primary threats to the national park and adjacent islands that generate millions of tourism dollars annually for Ecuador. 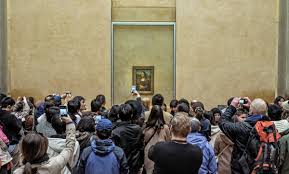 It’s hard to wrap your head around just how big travel and tourism has become:

“ [I]nternationally there were just 25 million tourist arrivals [worldwide]  in 1950. 68 years later this number has increased to 1.4 billion international arrivals per year …a 56-fold increase.”

It’s a global economic engine that many countries depend on to underpin their GDP (gross domestic product): 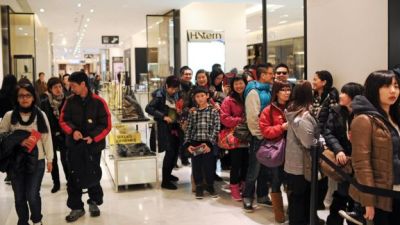 Standing in line at Paris’s famed Printemps Department Store to get access into one of the luxury boutiques.

Dependence on tourism for GDP

Numerous island nations and smaller countries depend on tourism as a major source of GDP (gross domestic product). Imperiled by climate change, rising seas, and severe weather events may leave them with an uncertain economic future. The top 10  (World Travel & Tourism Council) 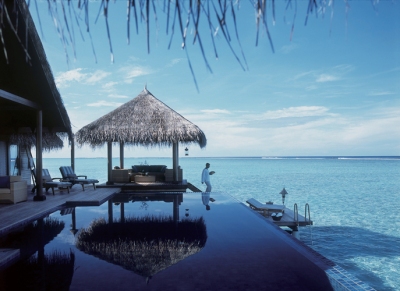 Rehendi Suite in the Maldives Courtesy of wikipedia

Europe, the world’s largest tourism region, reported solid growth (+4%) in early 2019,  led by destinations in Southern and Mediterranean Europe and Central and Eastern Europe (both +5%), according to the UNWTO World Tourism Barometer from the World Tourism Organization.

India is a burgeoning travel powerhouse, as well as the world’s most populous nation.  “India is on pace,” says the Center for Aviation “to be…[the world’s] third-largest aviation market by 2024 [behind US and China].  It now generates some $234 billion in tourism goods and services, but is expected to explode to $492.2 billion by 2028. (New York Times).

Other regions are also experiencing growth. The Middle East (+8%) and Asia and the Pacific (+6%) experienced the highest increase in international arrivals. Numbers in Africa were up by 4%, and in the Americas growth was recorded at 3% (UNWTO)

“Among the world’s top ten spenders, the Russian Federation (+16%), France (+10%) and Australia (+9%) reported the strongest increase in outbound expenditure in the first nine to eleven months of 2018. The United States (+7%) and the Republic of Korea (+6%) also recorded solid spending figures, all of them fueling inbound growth in their respective regions and beyond.”

Where and how are they going ? Cruising, cities & wildlife tourism

If there’s a tourist-friendly port or deep-water accessible waterfront, people are going there!

Today you can book a cruise at Costco while shopping for bread and toilet tissue!

The cruise industry has had several banner years, each breaking the prior year’s record:  24.7 million ocean global cruise passengers in 2016, 25.8 million passengers in 2017. An estimated 27.2 million were projected to cruise globally in 2018; 30 million in 2019. Cruise statistics

What does this ever-increasing volume mean in terms of the natural resources to operate, maintain and service 29 million people floating in the world’s oceans, as well as protect public health and safety ?

Cities at a tipping point

According to the World Tourism and Travel Council, much of the rise in tourism is concentrated in the same places. “Of the 1.4 billion international tourist trips in 2018, half a billion of those were to the 300 largest cities.”

Removing love locks that threatened the structural metalwork on this Paris bridge, 2015

“Locals” see things differently:  Massive amplification of tourism in dozens of cities means congestion, overuse of public transit, unchecked trash and waste, threats to infrastructure,  loss of quality of life in peaceful neighborhoods — the very assets that drive people from outside to come and visit. 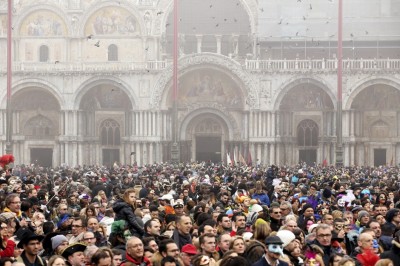 In Spain they call it “touristification.”

In sheer numbers, New York City revels in its #1 status. Mayor Bill De Blasio reported in the New York Times that the Big Apple was on target in 2019 for 67 million tourists. The city’s marketing agency NYC & Company reports it’s the city’s  10th consecutive year of rising tourism.  It’s like the entire population of France (65 million) descending on the Big Apple in one year. 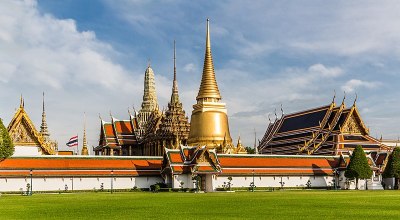 Mastercard’s Global Destination Cities Index in 2018 (200 key cities) revealed that Bangkok remained the No. 1 destination, with more than 22 million international overnight visitors.  Paris and London were numbers 2 and 3, each with around 19 million visitors. All top 10 cities saw more international overnight visitors in 2018 than the prior year, with the exception of London, which decreased nearly 4 percent.

Dubai topped the list of cities by dollar spent, with travelers spending USD $553 on average a day. Makkah, new to the top 10 last year, remains at No. 2 for the second consecutive year, with Bangkok rounding out the top three.

Wildlife tourism – the saddest tourism of all 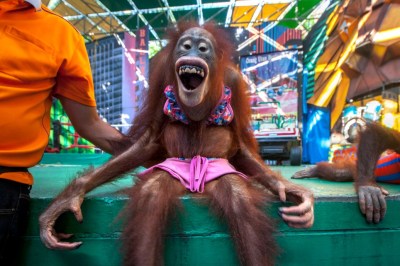 Orangutans in “bikinis” forced to fight each other. Courtesy of Caters News Agency

National Geographic calls it “selfie-driven” tourism, and the June 2019 issue shows you the public face and the private agony of wild animals that are kept caged, chained, tethered, shackled, nose-ringed, “trained” with bull hooks, declawed, teeth removed – all for the benefit of adoring tourists who happily pay for a ride, pet a tiger or take a selfie.

Hands-on wildlife encounters are unnatural – there’s no nice way to put it. But it is lucrative – and growing area of tourism

We’re not talking about photo safaris in Range Rovers in Botswana or visits to established wildlife sanctuaries and conservation centers where it’s possible to get up close while trained caregivers share stories of conservation triumphs and you’re close recovering animals.

This is tourism in places like Russia, Thailand, Amazonian Brazil, India

Most of the animals in wildlife tourism are trafficked. They are poached, captured from the wild – taken away from a herd or parent, treated harshly, to be “broken in.”

In a BBC News story, Dr Jan Schmidt-Burbach, Global Wildlife and veterinary adviser at World Animal Protection (WAP), said: “The cruel trend of elephants used for rides and shows is growing – we want tourists to know that many of these elephants are taken from their mothers as babies, forced to endure harsh training and suffer poor living conditions throughout their life. Read the full story

The WAP research study of almost 3,000 elephants in captivity, found that “more than three quarters were living in ‘severely cruel’ conditions. Many were bound with chains less than three meters long and were forced to stand on concrete floors close to loud roads, crowds and music.”

Thailand uses roughly twice as many elephants in tourism, according to the WAP as all the other countries combined. Over five years, the number of tourists visiting the country doubled to more than 30 million (2016 figure). The research found that 40% of tourists of the top nationalities visiting said they had been or were planning to ride an elephant, so captive elephants in Thailand gave rides to almost 13 million people last year [2016]. 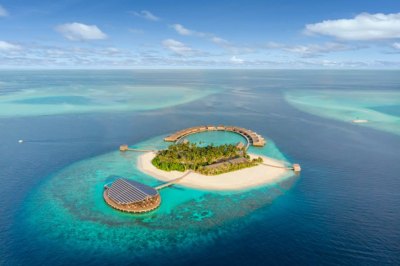 We’ve shared only a sliver of the global travel and tourism pie, but it’s enough to establish that more sustainable approaches have to be designed and implemented at every level by government and the private sector. Stay with us for Part II, an in-depth look at how to make your personal travel, and large-scale tourism, more sustainable for the planet !