Feb 15-18: Count Birds, It’s Free:  Wherever you are worldwide, you can participate in the Great Backyard Bird Count (GBBC) if you have Internet access.  You just need to watch birds at a particular location (your yard, your neighborhood park) for 15 minutes, then tally the numbers of each species you see, and report back to Bird Count. The GBBC is a joint project of the  Cornell Lab of Ornithology, Audubon, and Bird Studies Canada.  There’s a photo contest if you want to take pix, and a prize drawing for those who enter at least one bird checklist online.

Details at Bird Count web site on how to join the count, get bird ID tips, downloadable instructions, web buttons, and flyers. Parts of the GBBC web site are in Spanish.

Did you know there are 10, 240 bird species? “We’re eager to see how many …species will be reported during the count this year,” said Cornell Lab director John Fitzpatrick. “We’re looking forward to this historic snapshot of birds that that will be reported from around the world.”

DC Region Traffic Commute: It’s official –the Washington DC region has the nation’s worst traffic congestion. No surprise to those of us who live in DC, Maryland suburbs and Northern Virginia, where a.m. rush starts at 5 a.m. (ends about five hours later) and p.m. rush begins around 2:30 p.m.  With three jurisdictions (MD/VA/DC) and a dozen or more counties each coping with local roads, toll roads, beltways and interstates –-plus an underfunded transit system– the region reigns as the most congested metro area, according to the annual Texas A & M Transportation Institute study. The DC area beat out Los Angeles/Long Beach, the San Francisco Bay area, New York, and Boston, which rank 2-5. (Baltimore is actually # 15). The Institute has a proposed plan, but the most immediate solution seems to be: allow more workers to telecommute from home! Getting officials in the National Capital region to work in sync maybe tougher than the gridlock in the U.S. Capitol. Read the news story. Read TAMU’s Urban Mobility Report 2012

Tsunami debris in the open ocean/Courtesy of US Navy

Alaska Shores: Tsunami Trash Worse than Valdez? Wreckage from the 2011 tsunami in Japan has been reaching Alaska’s shores since last spring – actually two years ahead of projections made in 2011 by the University of Hawaii. Now the Gulf of Alaska Keeper Chris Pallister is stepping up his concern for the trash that’s arriving and fouling the pristine shoreline, that includes appliances, bottles and endless amounts of Styrofoam.  Billions of bits cover surfaces on Montague Island and are being eaten by birds, rodents and bears. “You’re basically standing in landfill out here,” says Pallister in a National Public Radio interview. Then there’s the question of containers and what they hold, or once held – household products, kerosene and other petroleum products.  There had been money allocated to the Alaska tsunami cleanup in the Hurricane Sandy relief funding from Congress, but it appears that it was stripped out. So far, no word from Japan on whether they will pony up to help clean their trash. Listen to the NPR story. 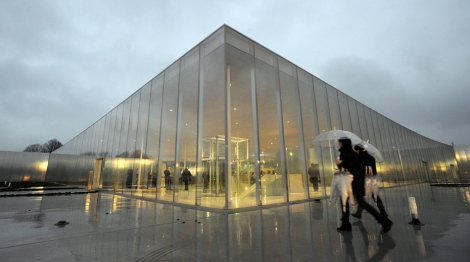 Hot Year for French Culture: Despite actor Gerard Depardieu’s departure for Belgium (renouncing his status as a citoyen de France), it is an unbelievably hot time for France’s cultural scene. As reported in Green News Update CITIES, the Louvre’s Islamic Center is open and packing them in.  The City of Nantes, France’s 6th largest city (and named most livable city in Europe by Time Magazine), is designated as European Green Capital for 2013, and the Louvre has a new, $195-million outpost in the northern mining city of Lens. The Louvre-Lens is a 300,000 square-foot museum and resource center, clad in glass and aluminum, designed by the Japanese architectural firm Sanaa on a 50-acre landscaped campus that was once a coal mining yard. The project in the Pas-de-Calais region of northern France is intended to be an economic generator as well as a place to bring art to outlying areas. And the pickings aren’t slim: Among the 200 pieces in the inaugural display on loan from the Louvre are Leonardo’s Virgin and Child with St. Anne; Delacroix’s patriotic Liberty Leading the People, and  Raphael’s Portrait of Baldassare Castiglione –showstoppers all. Read about Louvre-Lens.

Now it is Marseille’s turn – second largest city in France — to work on its image. Designated as the European Cultural Capital for 2013, Marseille is remaking itself with $135 million in improvements and 10 new or renovated sites, boat parades, a street-food festival and more. The Capital of Culture stretches from Martigues to La Ciotat and includes Arles, Aix, and Aubagne. Mark your calendar: March 1 for the opening of Regards de Provence, Mediterranean Reflections in a rehabbed museum that was once the port of entry for immigrants.

In June, the Museum of Civilizations from Europe and the Mediterranean (MuCEM) takes a bow: three sites, three settings – a new waterfront glass museum on the J4 pier; the nearby Fort Saint-Jean (dating from the 12th century and a new conservation center.  Background on the MuCEM  Here are places for exhibitions, concerts, films, talks and mingling. “It’s a shock, a cultural earthquake,” says Jean Pfister, who directs the group that assembled the Marseille-Provence proposal for 2013. Read the Marseille story. European Capital 2013 calendar and web site

Feral Cat Study – Billions of Victims: It’s already established that about one billion birds die each year in the US by flying into glass windows and window walls, from skyscrapers to residences.  A new report from the Smithsonian’s Migratory Bird Center and the U.S. Fish and Wildlife Center paints a grim picture: the number of birds and small mammals killed by feral cats and strays (more than by pets)  is in the billions: an estimated 1.4 to 3.7 billion birds, mostly non-native species; and even grimmer, 6.9 to 20.7 billion small mammals (rabbits, shrews, voles, etc.) This is not a call to exterminate all feral cats, but the problem is a human-made one and has to be solved by us.  People abandon cats and kittens into alleys, woods and parks; then they must live using their primal skills for killing. Many are also not spayed and continue reproducing.  You can do the right thing: adopt, spay/neuter, do not have a litter, support shelters and feral adoption programs. The Humane Society is hosting World Spay Day on February 26. Find an event or host one yourself. Read the Smithsonian blog story.

Rotterdam: 550 Sweaters on Parade. Since 1955  Loes Veenstra has knitted over 550 sweaters and stored them in her home on the 2nd Carnissestraat in Rotterdam. The sweaters have never been worn. Until now. The sweaters are all presented in a book called Het Verzameld Breiwerk van Loes Veenstra uit de 2e Carnissestraat, designed by Christien Meindertsma.  Loes and the fruit of her decades of knitting were discovered by Museum Rotterdam, which recently put her sweaters on display as part of the exhibition Over leven in Carnisse (Life in Carnisse).  Watch the flashmob movie — it will make your day.   (Our thanks to A. Meeuse in Amsterdam for sending the video to Green News Update.)