February 15-18: Great Backyard Bird Count: Don’t miss out on the fun. Everyone everywhere can participate providing you have 15 minutes and an internet connection. GBBC web site See the Green News Update story

March 12-24: 21st Annual Environmental Film Festival, Washington DC. What better way to learn about green filmmaking and see well over 100 “green” shorts in locations all over the DC area. Check the web site for the list of films and venues.

Through Feb 24 (and earlier closings) Wendell Castle: Wandering Forms – Works from 1959-79, The Aldrich Contemporary Art Museum, Ridgefield, CT and other New York exhibits. Castle is a century-spanning master (20th/21st) who has blurred the boundaries of art, craft and design in pieces that are beautiful, funny and fanciful. The shows celebrate his 80th year at venues in Connecticut, NYC and Kentucky, and an illustrated monograph co-published by The Aldrich Contemporary Art Museum and Gregory Miller & Co. Check schedule

Through March 10: Sultan’s Garden: The Blossoming of Ottoman Art, at the Textile Museum, Washington DC. The role of flowers in mid-16th century Ottoman creations. The exhibition chronicles how stylized tulips, carnations, hyacinths, honeysuckles, roses, and rosebuds came to embellish nearly all media produced by the Ottoman court beginning in the mid-16th century, including rugs, tent hangings and other textiles. Selection of images on the web site.

Through March 31: Designing Tomorrow: America’s World’s Fairs of the 1930s, Museum of the City of New York, NYC. Six Depression-era expositions that brought the vision of a brighter future to tens of millions of Americans are featured in photographs and lots of memorabilia, including works from the Museum or the City of New York collections.. If you missed it at the National Building Museum, make a beeline now. Some of America’s most beloved designers (Henry Dreyfuss, Raymond Loewy and Norman Bel Geddes, among others) are immortalized here. Exhibition details. Follow Designing Tomorrow on Tumblr.

Opens April: San Francisco’s Exploratorium reopens this spring in a new building that triples its exhibition space and adds displays on the environment, psychology, and microbiology in the hands-on museum that Founder Dr. Frank Oppenheimer said, is “a playful place.” The new location of the $220 million facility is on Piers 15 and 17 along the Embarcadero. A fitting tribute too to Dr. Oppenheimer, whose ideas reinvented the science museum (this is the centennial of his birth). New York Times story.

Through April 28: The Civil War and American Art, Smithsonian American Art Museum, Washington DC. Four of the nation’s premier 19th-century artists are represented in this exhibition which delves into how the Civil War influenced their work. Frederic Church, Winslow Homer, Eastman Johnson and Sanford Gifford are featured here, along with other painters and photographers, who at the time did not know whether the Union or the Confederacy would be the victor. Free. (It opens at the Metropolitan Museum of Art May 27, where you’ll pay a “suggested” donation.) Listen to Diane Rehm show interview with exhibition curator Eleanor Harvey. New York Times review

Through May 26, Manolo Valdés: Monumental Sculpture, at The New York Botanical Garden, Bronx. Light as a butterfly on the wing, but these pieces weigh tons. Spanish artist Manolo Valdés was enchanted by the live butterflies show at the American Museum of Natural History, as well as a powerful image he took in of butterflies swarming over the head of a Central Park sunbather. Voilà – inspiration took hold and the artist created a 50-foot wide sculpture of a woman’s head encircled by butterflies. Valdés, who is 70, has installed seven of his immense bronze, steel and aluminum sculptures on the grounds at the NYBG – some pieces are up to 17 feet high and 20 tons. It’s a perfect place to see them (more than once!) as winter winds down and spring buds and bulbs are all around. Exhibit web site.  New York Times story.

Multiple city tour schedule: The 2012 Small World Photomicrography Competition, sponsored by Nikon, attracts hundreds of scientists from the worlds of biology, genetics and medicine, who compete for top honors. The beauty at the microscopic level is grand. In this very small world, captured with photomicrography that requires superior technical competency, it is possible to demonstrate the true power of scientific imaging, as well as artistic skills. First place winners this year looked at the blood-brain barrier in a live zebrafish embryo. The Top 100 images are now a traveling exhibition to museums and science centers in a dozen states. Wired Magazine slide show and exhibition tour schedule. 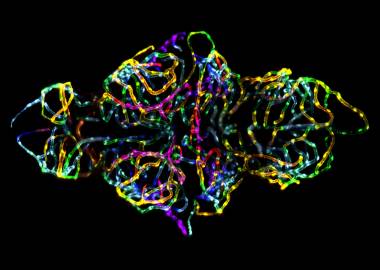