Cities: Getting There.  Whether on foot, by tram, or subway, mobility can invigorate or stifle life in urban centers. Check out our showcase (below) of historic and cutting-edge developments for pedestrians and those seeking alternatives to the automobile–NOLA’s famed Saint Charles streetcar line, Scoot in San Francisco, the High Line and its siblings.

Walking, biking and fewer cars in Amsterdam, Paris, Zurich and Strasbourg: Pedestrian zones, walking streets, bike-sharing, and environmental zones are becoming de rigueur in Vienna, Munich, Copenhagen and Zurich, to name a few. What can we learn from reducing automobile access and parking to bolster pedestrian-friendly walking and bicycling?

The Most Beautiful Walk in the World

The French have a name for it – flanerie – a strolling walk in the city. ( See our update below on NYC’s High Line). Writer/film critic John Baxter, who has lived in Paris for over two decades, produced a recent walking guide that focuses on day-to-day life, neighborhoods and arcane stories of people in Paris. Whether you take it with you, or read it in your armchair, this is a wonderful way to “see” Paris from an inside perspective. The Most Beautiful Walk in the World: A Pedestrian in Paris. (Harper Perennial) 320 pp $14.95 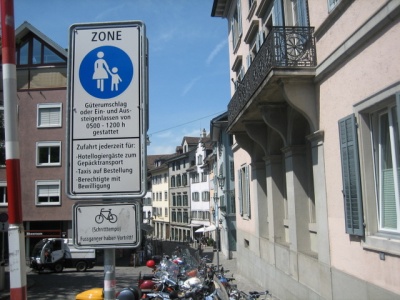 Here’s the case of Zurich, where closing areas to car traffic actually improved pedestrian traffic by 30-40% in the retail zone. People use tram, bicycle and car-sharing schemes to great advantage. A good overview story points out that people are more important than cars! Details

Central Brussels Car-Free? Recently elected mayor Ivan Mayeur proposes turning the city’s central axis –with a congested a four-lane boulevard and string of squares– into a pedestrian zone filled with cafes and plantings. Citylab says, “No European capital has been quite so ruined by motor vehicles as Brussels….” The term “ brusselization” was coined to describe the insipid planning process of the 1960’s that allowed historic buildings to be demolished for traffic-choked roads. If the new zone goes through, it joins a pedestrian zone around Grand Place and Rue Neuve, to create a grand “spacious, rambling open-air living room.” Read the whole story. 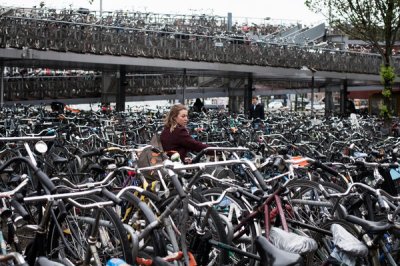 Amsterdam: Find your bike in this pile!

Did you know it costs $1,000 to get a driver’s license in Amsterdam? American writer Russell Shorto, who lived in Amsterdam for several years (and wrote the recent Amsterdam: A History of the World’s Most Liberal City) surveys how the Dutch integrate bicycles, walking paths, trams and parking. He reminds us that using a bus is not considered déclassé. Opinion piece

Lighted zebra stripes win the day: Dutch schoolkids working with IBM’s smart cities program came up with an innovative way to enhance pedestrian mobility – and safety — in “zebra” crosswalks. Check out this video to see how it works.

Times Square (NYC) Pedestrian Makeover: It started in spring 2009 with a batch of rubber lounging chairs in pink, green and blue stripes from Ace Hardware for a temporary, $1.5 million makeover of what has been called a “chronically amorphous and chaotic” area. (see the video)

Now the idea has morphed into a $27-million (and counting) major redo, with the Oslo/New York firm Snøhetta winner of the makeover competition. The Times Square Alliance explains it this way: “…Mayor Bloomberg opened the Broadway pedestrian plazas in Times Square, [4 years ago] creating new pedestrian spaces on the road between 42nd and 47th Streets. This landmark decision in transportation policy improved how employees, residents, and tourists experience Times Square, providing 50% more space for events, concessions, and the use of new street furniture for sitting and watching the urban bustle of Times Square. (Details and updates at Times Square NYC) Construction is expected to wrap up at the end of 2014. Interesting facts about the project design.

Europe’s Parking U-Turn: From Accommodation to Regulation from the Institute for Transportation and Development Policy surveys how European cities are benefiting from parking policies that emphasize reductions in car use, resulting in lower carbon emissions and better outdoor quality of life. ITDP Report

Foot path design: “Walking is fundamental to urban life. It is a healthy and pollution-free form of mobility and recreation. Pedestrian trips account for a quarter to a third of all trips in many Indian cities.” The authors of this ITDP report outline how improving pedestrian infrastructure makes walkers welcome in urban retail and commercial centers. Download the PDF from ITDP India

NYC’s High Line and Its Siblings: It’s a place to stroll, jog, sit, linger – safely above the traffic and din of the city. In just 15 years, New York City’s High Line – a pedestrian way and urban park on Manhattan’s West Side from Gansevoort Street in the Meatpacking District to West 34th Street, between 10th and 11th Avenues—has gone from pipedream to spectacular success. Thirty feet above street level, the High Line runs along a historic freight rail line that was threatened with demolition when the fledgling Friends of the High Line got underway. Yes, it has taken many, multi-million-dollar donations from families and foundations to get the job done. But it has also bolstered downtown lower West Side development (hotels and residential), the relocation of the Whitney Museum to a new building, new restaurants, and public art installed along its walkway. As Green News Update has reported before, Piet Outdolf– internationally recognized garden and landscape designer– has created imaginative native plantings and plantscapes. An award-winning LED-lighting system (no overhead lights)  provides nighttime illumination and access. Founders Joshua David and Robert Hammond were awarded the Jane Jacobs Medal for their contribution to NYC urban design. 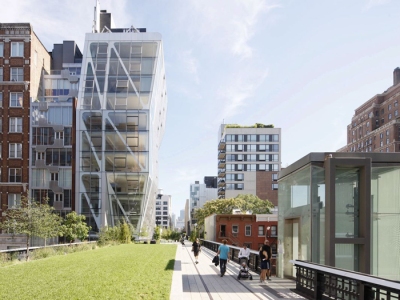 For those who cannot climb up to the walkway, four passenger elevators provide mobility and access for some of the four million people who use the High Line annually. (It’s possible to call or email in advance to get updates on outages and availability.)
The Rail Yards, third and final section of the elevated railway, has been donated to the city by CSX Transportation, Inc., to complete the High Line. (High Line Map)  When completed, the elevated park will extend to West 34th Street, connecting the Meatpacking District and West Chelsea with the future #7 subway station, the Javits Center, and the future Hudson Yards neighborhood. Multiphase construction is underway, with a goal of opening the first part of this final section in fall 2014. Read the High Line Blog for news and updates

Other Cities Come Calling: High Line founders Joshua David and Robert Hammond were inspired by a 1980’s project in Paris, the Promenade Plantée, an elevated park that stretches 4.5 km from the Place de la Bastille to Bois de Vincennes on an abandoned railroad viaduct and over footbridges. Landscape architect Jacques Vergely and architect Philippe Mathieux designed the Promenade. “Along the high-level walk, the architects chose a garden environment for pedestrians who choose to walk along the old viaduct.”

Paying it forward, the High Line has become an inspired model that is stimulating other cities across several continents – Hong Kong, Singapore, Rotterdam, Moscow, among others — to reconsider unused and abandoned rail sites that can be repurposed as pedestrian places that offer mobility and linkages in the urban areas. High Line Inspires Others

San Francisco’s Scoot Network: One of the least affordable cities in the US now has a low-cost, environmentally friendly transportation option for the car-free and those who choose not to use their Mercedes SUV or Bmer for errands: a fleet of rental electric motor scooters at just $3 per half-hour with the “basic plan” that requires a $15 start-up fee and five bucks per month. All plans include training, helmets, frequent maintenance, liability insurance, and support — and the first ride is free. The Scoot is a one-passenger vehicle. No motorcycle license required for the “basic plan,” but you need a valid driver’s license and clean driving record. Details

The hitch ? You have to have a smartphone (iOS or Android) to ride a Scoot. That’s how the Scoot Network keeps track of your vehicle and generates information such as maps and battery levels.

Scoots are parked in garages and at transit hubs all around San Francisco, including the Mission, Hayes Valley, North Beach, Panhandle, Dogpatch, Caltrain, SOMA, Mid-Market, the Castro, in the Financial District, along Polk St, at the Embarcadero, in the Fillmore District.

Environmentally speaking, these vehicles are cool: They get the equivalent of 600 mpg. When driving at 25 mph, “it uses about half the power of your toaster to carry you around the city,” and virtually every part is recyclable.

Will they be coming to your city anytime soon ?

The Saint Charles Avenue loop ambles along for 13 miles from the Central Business District onto a dedicated median past some of NOLA’s fanciest antebellum mansions, historic monuments, the Garden District (hop off for lunch at Commanders Palace and views of the famed St. Louis 1/2/3 above-ground cemeteries), and on to Uptown’s Audubon Zoo.

The streetcars — built by the Perley Thomas Co. in the 1920s–are historic too: kitted out with brass fittings, mahogany seats and bare bulb fixtures that hang from the ceiling. On the Saint Charles line, time’s not the thing … charm and romance are your ticket to ride. (Three other NOLA streetcar lines Canal Street, Riverbend and Loyola Avenue suffered the ravages of Hurricane Katrina in 2005.) You get a great experience for $1.25, payable in exact change when you board. For a glimpse, check out this video 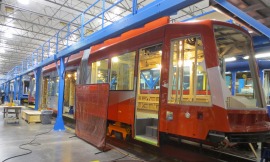 What’s Old is New Again: For nearly a century, Washington DC’s streetcars carried residents and tourists alike from the Navy Yard and Takoma Park past the White House along leafy Pennsylvania Avenue, through Georgetown and on to respite and recreation at historic Glen Echo Park in Maryland, which offered weekly ballroom dancing and a cool retreat from city summers. In 1962 all that ended — the last remaining line was shut down and the automobile became king in DC. Now, a new two-and-one-half mile H Street streetcar line – in the works for years – looks like it will become operational (fingers crossed) before the end of 2014. It’s the first leg – and part of the revitalization of the H Street NE corridor — in a proposed 37-mile system. Ken Rucker, a historian at the National Capital Trolley Museum in Colesville, MD, says “ the route along H Street, a historic commercial corridor, dates back to 1872.” The goal is to build a network to connect distant neighborhoods in all four quadrants of the city. Listen to the 4-part radio feature series (text and photos too) on WAMU-FM. UPDATE: In an unexpected  setback (May 28), DC’s City Council chair has just chopped money from the District DOT budget that could effectively delay or “kill” the streetcar project!.

Coming this summer: Cities: Mobility Part II looks at light rail, subway and high-speed (intercity) rail projects, and airport makeovers that stimulate commuting, pleasure trips and the urban environment. We’ll include  bullet trains in China , the new airport terminal in Mumbai, conversion of Hong Kong’s downtown Kai Tak Airport for residential and entertainment , taking a day trip from London to Paris via the chunnel, and more.