Northern Cardinal (Courtesy of Michele Black, Ohio) is at risk, along with the scarlet tanager, rufous hummingbird, Baltimore oriole, hairy woodpecker, and the bald eagle!

The recently released U.S. Postal Service “forever stamps” feature 10 North American songbirds – from the Baltimore Oriole to Western Meadowlark — but stamps may be the closest some of these species will get to “forever,” according to a troubling new study by the National Audubon Society that points out half of bird species in the U.S. are increasingly endangered as a result of climate change. A second report State of the Birds Report Card  –just released by Cornell, the Smithsonian and other partners — presents similar concerns and a Watch List of vulnerable species. JUST ADDED: Science Friday (NPR radio) interviews Gary Langham of the National Audubon Society and Ken Rosenberg from the Cornell Lab of Ornithology on which species are under threat and how climate change might affect birds in the future.

Osprey back in Washington DC after years of pollution in the Anacostia River. They are at risk according to the new Audubon Climate study.

Audubon’s study – the first of its kind– looked at data collected over decades from thousands of citizen-scientists who participate in the annual Audubon Christmas Bird Count, from the North American Breeding Survey, as well as scenarios furnished by climate scientists on greenhouse gas emissions to determine the “climate suitability” for 514 bird species. 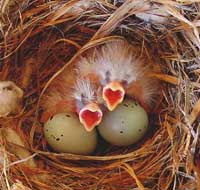 Gary Langham, Audubon’s chief scientist and lead investigator, says, “ It’s an urgent message. Nearly half of the bird species in the US and Canada are seriously threatened by climate change.” Each species, he recounts, is fine tuned, physiologically, behaviorally and genetically, to live in specific habitats and environmental conditions, such as temperature range, precipitation and seasons. That’s what is in jeopardy for our avian friends,

What did Audubon learn ? (Findings below courtesy of National Audubon Society)

Baltimore Oriole  may change its change. Courtesy of the National Audubon Society

Conservation biologists are looking at adaptation strategies as the way many species – birds, amphibians, mammals – may survive higher temperatures and uncertain or more severe weather in the years ahead by moving north or relocating somewhere else.  But nothing is certain. “Since 1600, only about nine bird species have gone extinct in continental North America, ” said Graham, ” but we’re looking at half of North American bird species at risk by the end of this century,” in a statement released to the Washington Post.

Our national symbol, the Bald Eagle is at risk!   In the Pittsburgh (PA) area a nesting pair caused a lot of excitement in summer 2014,  after a 200-year absence of these majestic predators. (Photo courtesy of AZ Fish & Wildlife)

Yes, you can help!

Audubon Study at a Glance

Look at the State of the Birds Watch List