A gratifying moment came last week for the rusty patched bumblebee – a highly threatened species of native bee in the U.S. that is an essential pollinator in such crops as tomatoes, blueberries and cranberries.  Bombus affinus, as the rusty patched is officially known, is the first bee species in the continental U.S. to be listed as an endangered by the U.S. Fish & Wildlife Service (USFWS).   It’s one of 4,000 known native bee species in North America.  (Males and workers have the rusty reddish patch on their backs !)

The rusty patched bumblebee has great characteristics that make it valuable in agricultural production: it’s bigger and stronger than conventional honeybees; and its size causes higher vibration of the anthers in flowers that hold pollen, hence better crop production (tomatoes and blueberries).

These bumblebees were once a commonplace in over 28 states from Minnesota to Maine and to parts of Canada, but are now limited to small and scattered colonies in about a dozen states, including Illinois, Ohio and Minnesota, and one Canadian province.  Over the past two decades, the species  has declined in nearly 90% of its range.  The endangered designation means that the rusty patched bumble bee is in danger of becoming extinct—and a threat to successful agricultural production — throughout all or a portion of its range, says USFWS. (See Washington Post story) 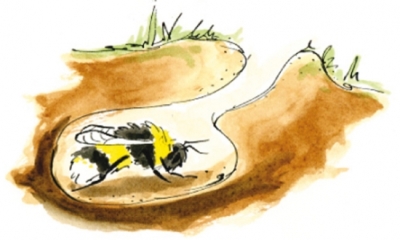 What happens next ?  USFWS is developing a  plan for long-term recovery – and there are regulations (opposed by the Trump Administration) that protect against deliberately damaging or destroying their habitat. The rusty patched bumble bee nests and hibernates below ground  – excavation, habitat destruction and pesticide exposure can wreak havoc with the remaining populations.  Many of the grasslands where it once thrived have been converted to housing developments!

Honeybees, bumblebees, solitary bees, moths and butterflies are the linchpin of multi-billion-dollar agriculture worldwide — fruit, vegetable and nut crops. There are many other pollinators – birds, small mammals, bats, beetles, and other insects – but bees are key to human survival!

More than Honey is an epic documentary (2014) on bees and their role in the food chain. Check out the film trailer.

What about your bee-friendly practices ?

At home, in your backyard and at work

(Suggestions thanks to the Pollinator Friendly Alliance)

Rusty Patched Bumble Bees in the collections of Great Smoky Mountains National Park. Preventing extinction of the species is key to robust agriculture.