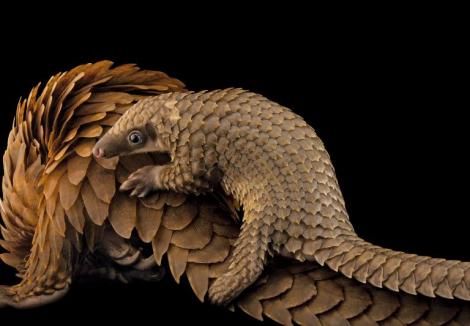 Editor’s Update: A three-part  documentary Rare: Creatures of the Photo Ark, with photographer and conservationist Joel  Sartore, will broadcast July 18, July 25 and August  1, 2017, on  PBS stations throughout the US.  Sartore created the Photo Ark project in 2005. Internationally, the series airs on the National Geographic Channel in September. Read about Joel Sartore and the Photo Ark (below).

Three renowned photographers who’ve captured nature on every continent over the past thirty years-– Frans Lanting, Joel Sartore, and Brian Skerry – have logged tens of thousands of hours documenting the beautiful, the rarely seen, and the endangered on our planet. This year, all three are engaged in projects — exhibitions, books,  public events, broadcasts– to share their artistic ability and fierce sense of urgency for conservation with a much wider audience.

Our three-part article series leads you to videos, TED talks, books, exhibitions and broadcasts. Plus you can review their portfolios and buy prints.

Come along on this journey with National Geographic Fellow Joel Sartore. ♦♦♦

National Geographic Fellow Joel Sartore is so much fun to listen to, you’re surprised at how compelling and personal he is about the loss of biodiversity, the threats of extinction, and what he wants people to do: pay attention. Perhaps it’s because he is a native Nebraskan with an easygoing style — don’t be deceived.

The man himself with a clouded leopard cub at the Columbus Zoo in Ohio! Photo copyright by Grahm S. Jones Columbus Zoo and Aquarium

Sartore is on a 25-year worldwide mission. “The whole goal of my life,” he says, “is to get people to care about species while we can still save them.” Sartore has traveled to 40 countries in search of nature and wildlife photographs for the National Geographic where he is a contributing photographer. That means finding the right shot to make clear what happens when Uganda’s agriculture bumps up against a wildlife reserve with a hungry lion population; or how many koalas –45 laid out neatly on a mat including a mom curled up with her baby— were killed by domestic dogs, because development has converted their habitat into roads and subdivisions.

As for extinction, he is painfully aware that half of all species on Earth may be gone by the end of the this century!

After 20 years on assignment, Sartore created the Photo Ark project – a commitment to photograph every captive species, some 12,000+, most of them endangered or on the brink of extinction — birds, fish, mammals, reptiles, amphibians and invertebrates. See the Photo Ark Gallery 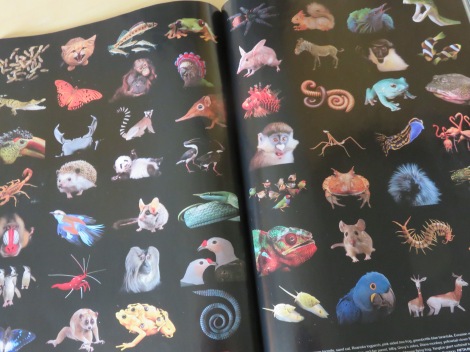 Photo spread in National Geographic (April 2016) shows a fraction of the thousands of species that have “sat” for portraits in the Photo Ark.

Just over ten years in, he has photographed over 6,500 species on the critical bucket list. “I go and go and go,” he tells people at a TedX midwest talk. See the video  “I’ll keep going until I drop…. I must get people into the tent.”

Not for a minute should you doubt his resolve:  The Photo Ark isn’t intended as a photographic archive once all of these species have gone extinct. “I want the pictures to work long after I’m dead,” he says in a 2016 National Geo story.

Why did it happen? 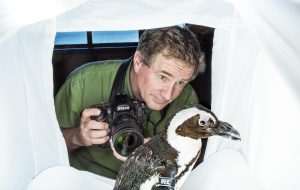 Sartore with African Penguins at the Monterey Bay Aquarium. Photo by Annie Tritt

Sartore sort of backed into this next-in-life mission in 2005 when his wife was diagnosed with breast cancer. The peripatetic photographer knew he would stay with her in Nebraska during her treatment, but he was restless and needed a closer-to-home project. He started with portraits of zoo animals at the nearby Lincoln Children’s Zoo.  “I’d done almost 20 years of photographing in the wild, and I wasn’t moving the needle much in terms of getting people to care,” he says in the National Geo story (April 2016) 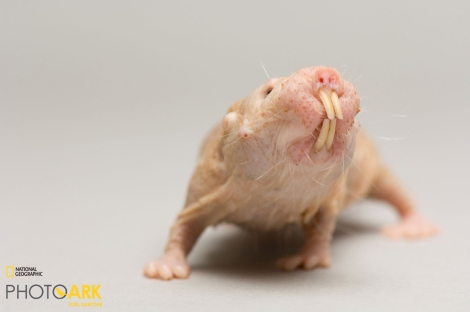 The naked mole rat – the first to be photographed for the Photo Ark – proved to be a personal epiphany. Think in Biblical terms (“and the last shall be first”): this tiny creature represents what a lot of biodiversity is about: millions of seemingly inconsequential insects, birds, reptiles, amphibians. Many of the animals he’s already documented people might walk by and never take note.

Passenger Pigeon painting by Walton Ford. Courtesy of the artist. The passenger pigeon went from billions to complete extinction in less than half a century.

Not Joel!  One of his most compelling memories – from a bird book his mother gave him as a boy—depicted bird extinctions. He was captivated by the image of Martha, the world’s last passenger pigeon, the only one left after billions were killed as foodstuffs to be shipped around the US in barrels. He says he returned to that page many times!

“It’s become apparent to me,” he said in a 2009 Audubon Magazine story, “ [e]ndangered species belong to all of us….Do we as a society treat the least among us with dignity and respect?”

How Does He Do It? 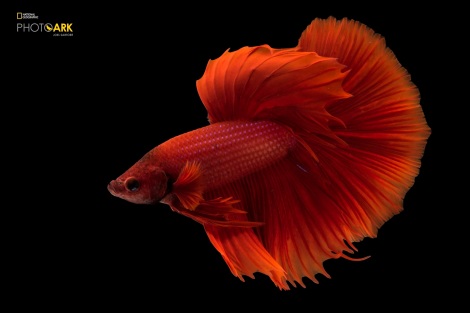 Sartore is usually up close and personal when he is shooting at zoos and nature reserves. It’s a specially prepared one-on-one setting. Whether it’s a rhino or a marine bird, all portraits are on a black or white backdrop paper or painted surface, the great equalizer, as he calls it.  “The polar bear is no more important than a mouse, and a tiger and a tiger beetle are exactly the same,” he says. 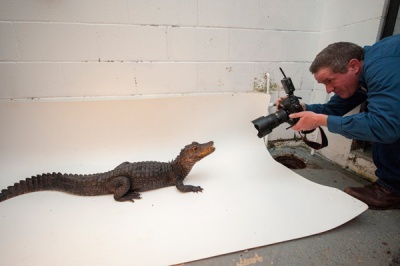 Joel Sartore on the set

Joel is patient as he observes that all animals have distinct personalities! It’s a riot to see a chimp totally destroy his white wallpaper backdrop in about five seconds or a turtle poop on the paper. Watch this great time-lapse video clip  of animal shenanigans 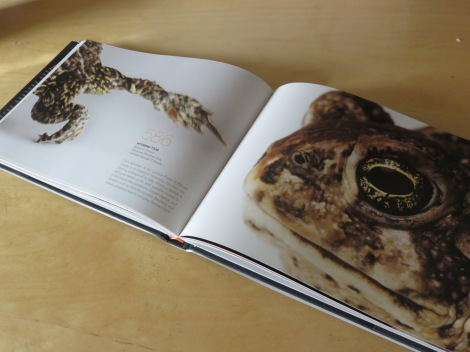 A spread in Sartore’s book Rare, the Wyoming Toad (Anaxyrus baxteri), once abundant in SE Wyoming, numbered about 586 when he did this portrait. Listed as endangered in 1984. (Courtesy of Rare, Portraits of America’s Endangered Species)

“I get most excited when I do little critters like this,” he says, “because nobody’s ever going to give them the time of day.” (National Geographic April 2016) 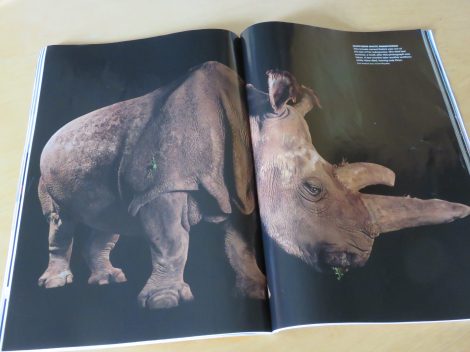 A week after Sartore took this portrait of Nabire, a northern white rhino, she was dead; then several months later another died, leaving only three of this subspecies remaining on the planet. Courtesy of National Geographic April 2016 issue.

“Fifty percent of all animals are now threatened with extinction, and it’s folly to think we can drive half of everything else to extinction but that people will be just fine,” says Sartore. “That’s why I created the Photo Ark. I hope seeing the images fills people with wonder and inspires them to want to protect these species.” 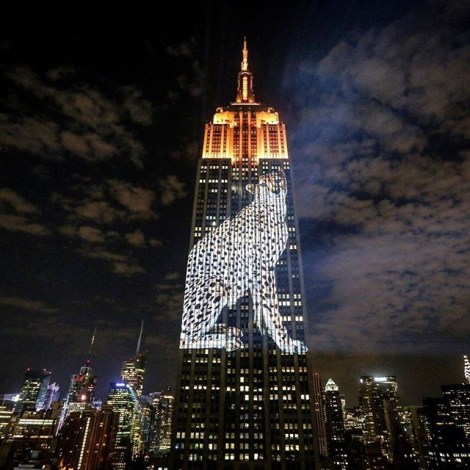 Photo Ark images of the mighty and the small have found their way onto the world stage and more intimate venues too. They were projected onto  the Empire State Building in 2015 for Louie Psihoyos’ Racing Extinction event; the United Nations and St. Peter’s Basilica in Rome. See our story from 2015 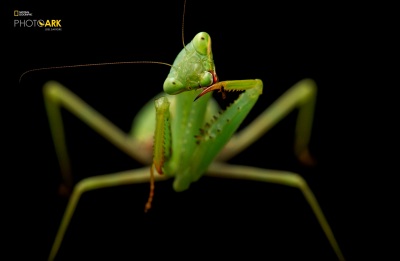 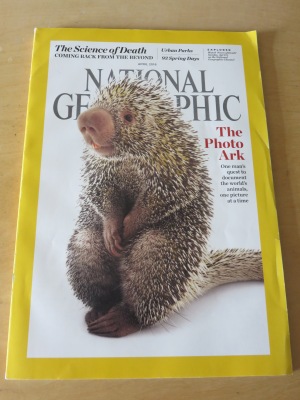 Brazilian porcupine was on the cover of the April 2016 issue, and Geo created 10 more for readers to select. Copyright Joel Sartore/National Geographic Photo Ark.

Photo Ark is a joint project of National Geographic and Sartore. That affords him a cross-media platform that is expanding his message worldwide with kids’ activities, books, exhibitions and broadcasts. Sartore  continues a relentless pace to share his message — and doing portraits of “every last one.”

But he wants more — something from us.

“About once a year I photograph something that’s the last of its kind or close to it,” says Sartore, who photographed Toughie [the last Rabbs’ fringe-limbed tree frog] in 2013. “I get sad and angry because I can’t imagine that this won’t wake the world up and get people to care about extinction.” (10/27/16)

His campaign #SaveTogether  with the Geographic offers kids, their parents, teachers, and the rest of us with activities, books, and messages to take understand what extinction means — and to take action. We’re giving you access to many of the resources to use at home and in your community.

PBS  3-part TV Documentary  (Summer 2017) WGBH TV in Boston produced a 3 part special (June-August): Millions will get to see Joel’s continuing journey on RARE—Creatures of the Photo Ark, that airs on PBS stations across the U.S. (Check local tv listings.)  RARE will air internationally on National Geographic Channel in September 2017. See behind the scenes

Dallas Zoo (Dallas TX through Sept 4) After the traveling exhibition leaves in September, there’s a permanent installation of Photo Ark images in the tunnel separating ZooNorth and the Wilds of Africa.

Behind the scenes funny video what it’s really like

Books of the Photo Ark 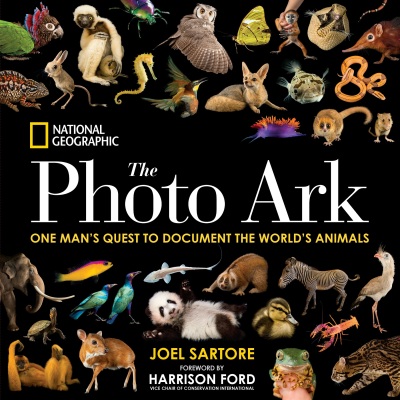