Phase 1 of the Philadelphia Rail Park, opened June 14. Courtesy of the Friends of the Rail Park.

Parks are blooming all over Philadelphia, but one, in particular, has travelers, tourists, and residents rejoicing:  The Rail Park –one of the next generation of greenways popping up around the US and elsewhere – just made its debut on June 14 in Center City, part of a three-mile-long stretch of obsolete rail lines built and formerly used by the Philadelphia and Read Railroad companies.

Entrance to Phase 1, schematic. Courtesy of the Friends of the Rail Park

When completed, the Rail Park will stretch across 10 neighborhoods from Center City to Fairmount Park– with pedestrian-friendly pathways, lush greenery, rest spots, and spaces for walking, bicycling, arts, and wellness activities.  “The design of the park, led by Studio Bryan Hanes, maintains an industrial feel with steel platforms, benches and guardrails.”

Phase I of the project—which opened June 14 — turns a quarter-mile of abandoned train tracks into a spacious elevated park with plenty of trees, plants and places to relax. The footprint stretches from Broad and Noble streets, then jumps up to the Reading Viaduct overhead and ends above the 1100 block of Callowhill Street (between 11th and 12th Streets) . Entry is free.

See the drone video  of Phase 1

The masterplan calls for three distinct sections that will form a vibrant public space : the  (Reading) Viaduct, a half-mile-long elevated iron pathway that’s twice the width of the High Line; the Cut, which spans 9 blocks and dips 30 feet below street level; and the Tunnel, a 3,000-foot-long industrial stone passageway made of vault and brick.

There are environmental benefits too! Plantings for air quality and stormwater management.

Who is making it possible ? The Rail Park has support from the City of Philadelphia, the Commonwealth of Pennsylvania, the Center City District, the William Penn Foundation, the Knight Foundation, Poor Richard’s Charitable Trust, the McLean Foundation, and others.

The Philly Rail Park has a lot in common with one of Paris’s better kept secrets – but well known to locals – the Promenade Plantée, a verdant 4.5-kilometer pathway through parks, gardens, passageways and tunnels in the city’s 12th arrondissement. It’s the world’s first elevated rails-to-trails project, and a model for New York’s High Line and similar projects

The Coulée Verte, or Green Flow, as it is known to Parisians, connects the city between Bastille and the Bois de Vincennes (though not directly into the Bois).

The now-defunct Vincennes rail line — Bastille to Varenne-Saint-Maur 1859 to 1969– was transformed in the late 1980’s by architect Philippe Mathieux and landscape architect Jacques Vergely, who, with the City of Paris government, blazed the trail, reusing 70 brick arches of the former rail viaduct to create the Viaduc des Arts, now restored as shops and spaces for artists and craftspeople. You can walk over the viaduct for 1.5 kilometers, and then it becomes a sunken walkway that meanders through green areas, including the Jardin de Reuilly, and between buildings of various architectural periods from Hausman to modern. There are pedestrian-only areas, as well an ample section with bike paths.

Read more about the Promenade Plantee 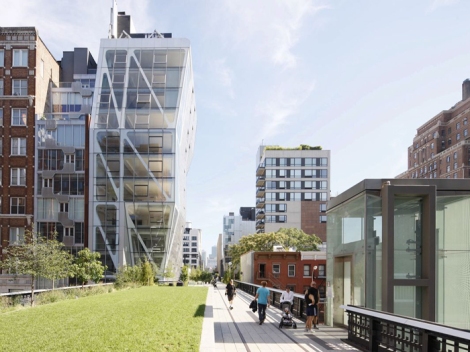 Joshua David and Robert Hammond , founders of New York’s popular High Line(five million visitors a year!) were inspired by the Promenade Plantée as a model for New York’s elevated public park, built on the historic freight rail line elevated above the streets on Manhattan’s West Side. 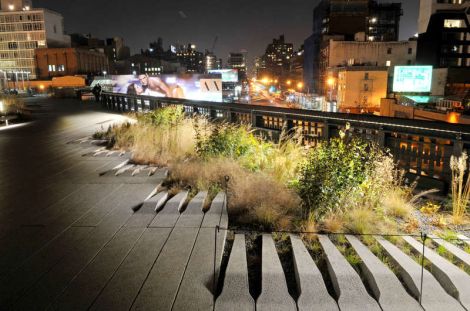 It took 15 years and multi-million-dollar donations from families and foundations to go from pipedream to spectacular success that has also bolstered downtown lower West Side development (hotels and residential), the relocation of the Whitney Museum to a new building, new restaurants, and public art installed along its walkway. (High Line Map)

Thirty feet above street level, the High Line runs along a historic freight rail line that was threatened with demolition when the fledgling Friends of the High Line got underway.  It runs from Gansevoort Street to West 34th Street, between 10th and 12th Avenues, connecting the Meatpacking District and West Chelsea with the future #7 subway station, the Javits Center, and the Hudson Yards neighborhood.

Safely above the traffic and din of the city, residents and visitors can stroll, sit, listen to music, view the city, look at imaginative plantscapes with native plants. It’s accessible too, with four passenger elevators that provide mobility and access for one and all. For their efforts, founders Joshua David and Robert Hammond were awarded the Jane Jacobs Medal for their contribution to NYC urban design.

Read the High Line Blog for news and updates

The Reading Railroad was built in the 1890’s to bring people into the city. By 1992, the Viaduct and rail line were abandoned. The plan for the Rail Park sprouted from a neighborhood organization’s vision to build a public park in place of the abandoned Viaduct.  That organization — now known as Friends of the Rail Park — partnered with Center City District in 2010 to begin work on Phase I of the Rail Park. It took another eight years to come up with the concept and schematic design study – with input from neighborhood meetings and online surveys. An important point: The study found it was cheaper to reuse the Viaduct than demolish it!

Elsewhere in the City 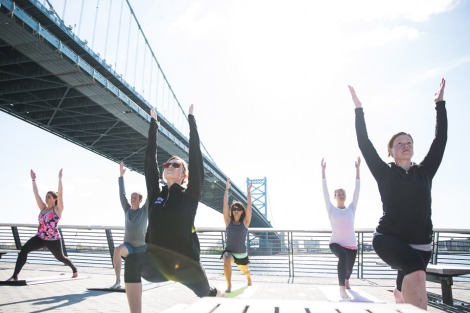 Since the 1970’s and the advent of Penn’s Landing on the Delaware River, the city has struggled to find an effective way to attract people – as well as developers and commercial traffic – to the waterfront. One big problem: the 10 lane I-95 highway that cuts through Philadelphia and makes it unpleasant to get the water.  There were several efforts – including Penn’s Landing – but none of them stuck.

In 2009, the City of Philadelphia formed the Delaware River Waterfront Corporation, a nonprofit organization to manage waterfront development.  Then came the $250-million masterplan, with an ambitious set of proposals: to have a park every half mile along the waterfront, to trails, maritime, residential, retail, hotel and other improvements; and eventually create a sixth square in Philly by covering a portion of the I-95 highway that cuts through the city. Long story short: the city is creating a riverfront-friendly amenity that attracts people and investment.

Read more about waterfront development plans and achievements in Philadelphia

Paying it forward:  The High Line has become an inspired model that is stimulating other cities across several continents – Hong Kong, Singapore, Rotterdam, Moscow, among others — to reconsider unused and abandoned rail sites that can be repurposed as pedestrian places that offer mobility and linkages in the urban areas.

Green News Update will keep you posted on Philly’s greening and what other cities are doing (Atlanta, Chicago) to create urban trails and greening,