Thanks to all of our readers and followers for another great year – that means you and your colleagues are helping to grow our site. 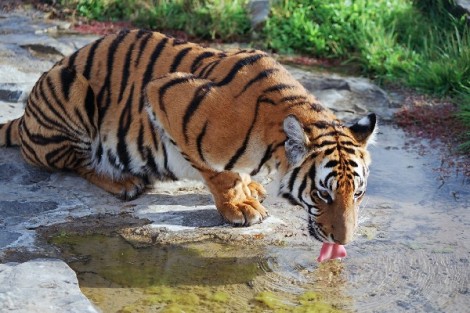 Panthera tigris amoyensis is among the most endangered animals on earth.

It’s an independent analysis, based on the numbers. So what happened in 2014?

And there were plenty more that attracted attention — urban reports from Amsterdam to Beijing, remembrances of writer Peter Matthiessen (The Snow Leopard) and designer Massimo Vignelli, threats to rhinos, big cats and elephants, heroic efforts by scientists and everyday people, over 80 books reviewed.

Happy City by Charles Montgomery was one of more than 80 books we recommended and reviewed in 2014.

Come back often – or casually as your mood suits. We’ll do our best to offer honest reporting, guide you to the best resources, and make it easier to search and access stories on our site that may interest you.

The New Wilderness in the Netherlands (see article link above)  on land reclaimed from the Zuider Zee.  Red deer introduced in 1992 are similar to elk. The herds are among the high density grazers that keep the grasslands well mown. Courtesy of Staatsbosbeheer.nl.