A worldwide bird census takes place Feb 12-15 – and you can be part of it! The Great Backyard Bird Count  (GBBC)— made up of Audubon, Cornell (University) Lab of Ornithology, and Bird Studies Canada –works together with the public on this worldwide annual bird count. Tens of thousands of volunteers like you, in dozens of countries, participate. Here is the official site to learn more and sign up.

You will need to create a GBBC account (it’s really easy).

Anyone in your household can participate. You can do your count at home or a nearby park, lake, river, woodland trail or elsewhere. And you can submit counts every day– or not. It’s good to submit a list online every day, but not required.  And it’s fun!  Here are the instructions

In 2015, bird watchers around the world set new records for the Great Backyard Bird Count

Why is the GBBC important ?  Birds are an essential part of the web of life. They eat prodigious numbers of insects and spiders; they distribute seeds by eating fruit from trees and shrubs; they even help pollinate plants – and many species are in trouble.

One big variable this year is the El Niño weather phenomenon that’s warming Pacific waters to the highest temperatures ever recorded, Will  the El Niño have a major effect on the bird count? After all, the Niño is precipitating severe and unusual weather events over many parts of the country.  GBBC’s scientists say:  Information gathered and reported online at birdcount.org will help scientists track changes in bird distribution, some of which may be traced to El Niño storms and unusual weather patterns.

A troubling study  released in September 2014 by the National Audubon Society points out half of bird species in the U.S. are increasingly endangered as a result of climate change. A second report State of the Birds Report Card  –released by Cornell, the Smithsonian and other partners — presents similar concerns and a Watch List of vulnerable species. For links to the studies and their findings, read our Green News Update story from September 2014.

Gary Langham, Audubon’s chief scientist and lead investigator, says, “ It’s an urgent message. Nearly half of the bird species in the US and Canada are seriously threatened by climate change.” 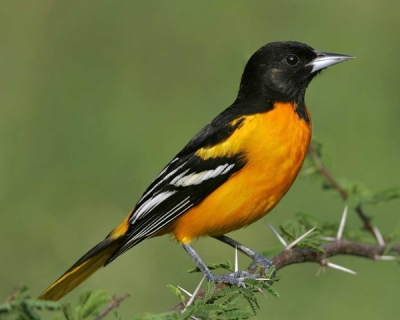 If you love birds, feed your feathered friends and go birding , the Great Backyard Bird Count is for you, your kids, and grandkids! Your participation – and your counts –actually helps bird experts figure out what’s going on in different regions and countries. 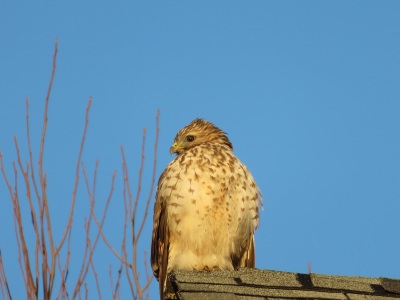 Red-tailed hawk on my rooftop keeps a lookout at my bird feeders (Bobbie Faul-Zeitler, CC 3.0)