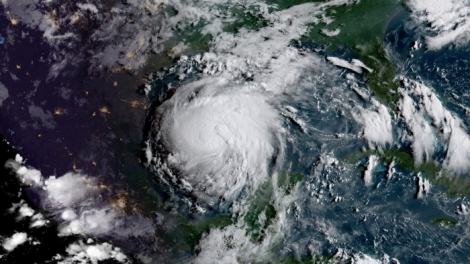 A Peabody-award-winning report, Hell and High Water,  on how Texas, and the Houston area in particular, might suffer catastrophic hurricane damage in a future storm, was made public in March 2016 by The Texas Tribune in conjunction with ProPublica. Now, Hurricane Harvey is creating a path of destruction that endangers millions of people in Houston, the Galveston Strand, Johnson Space Center, Exxon Mobil Chemical (the world’s largest refining and petrochemical complex) and the Houston Shipping Channel.

BUT… good urban planning, zoning regulations and preserving green space could prevent this sort of tragedy—the “monster hurricane” — according to Hell and High Waters’ authors. Plain text version and the  Interactive version

First, it’s important to know that Houston – the fourth largest city in the U.S. –has no zoning. Yes, that’s right. Developers have a basically free hand in acquiring sites and installing subdivisions or commercial development in the burgeoning Houston region. There are virtually no development regulations, and developers often sue successfully to get their way!

Developers are paving over wetlands and storm resilient prairie – the sort of land that can better absorb and filter water from severe storms. And low-lying areas, which shouldn’t be developed at all, are packed with housing and sought-after coastal locations.

Dutch Know How Can Help
In June Green News Update reported on the resilience of  the Dutch – much of whose land is actually below sealevel – and the exceptional technologies, as well as common sense, the Netherlands has developed to protect people and communities from deadly effects of storms and flooding.

Henk  Ovink, a Dutch expert on rising water and climate change, says, in a recent New York Times article, “You can say we are marketing our [Dutch] expertise, but thousands of people die every year because of rising water, and the world is failing collectively to deal with the crisis, losing money and lives.”

As the Times story points out, the solution …”is, in essence, to let water in, where possible, not hope to subdue Mother Nature: to live with the water, rather than struggle to defeat it. The Dutch devise lakes, garages, parks and plazas that are a boon to daily life but also double as enormous reservoirs for when the seas and rivers spill over.”
The Times story is a must-read: It features the technological genius of the Dutch in creating the massive storm surge gates (Maeslantkering) built outside Rotterdam and intended to protect the city – and the Rotterdam port, which is the largest container port in Europe. The gates are part of the Delta Works, an ambitious program started 50 years ago to protect the Dutch from powerful North Sea storms.

Impacts of a Monster Storm

Hell and High Water predicted: “Such a storm would devastate the Houston Ship Channel, shuttering one of the world’s busiest shipping lanes. Flanked by 10 major refineries — including the nation’s largest — and dozens of chemical manufacturing plants, the Ship Channel is a crucial transportation route for crude oil and other key products, such as plastics and pesticides. A shutdown could lead to a spike in gasoline prices and many consumer goods — everything from car tires to cell phone parts to prescription pills.”
“ ‘ It would affect supply chains across the U.S., it would probably affect factories and plants in every major metropolitan area in the U.S.,’ said Patrick Jankowski, vice president for research at the Greater Houston Partnership, Houston’s chamber of commerce.”

What Are We Waiting For?
Resilience is the fancy word for protecting our cities and towns, infrastructure and people from severe weather events that include hurricanes, tornados, heavy storms that cause flooding, and coastal storm surges. Nonprofits such as the Rockefeller Foundation’s Resilient Cities have been dumping millions of dollars into “resilience” studies and initiatives. 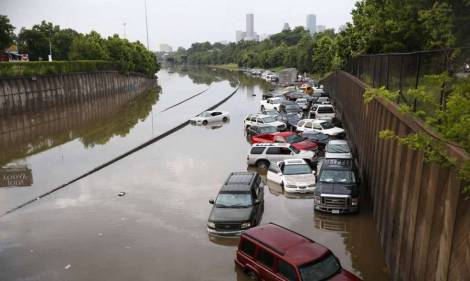 Motorists stranded along I-45 along N. Main in Houston (Aug 26). Cody Duty/ Houston Chronicle via AP.

In Texas, what are we waiting for ? The Dutch are world experts and should have been consulted years ago to develop solutions for Houston and other vulnerable cities, more sophisticated than putting existing houses on stilts. (Rising Seas from PRI)

According to Hell and High Water, there are some solutions that have been talked about: “ One, dubbed the Ike Dike[for a past severe hurricane] calls for massive floodgates at the entrance to Galveston Bay to block storm surge from entering the region. That has since evolved into a more expansive concept called the ‘coastal spine.’ Another proposal, called the ‘mid-bay’ gate, would place a floodgate closer to Houston’s industrial complex.

” ‘We’re sitting ducks. We’ve done nothing,’ said Phil Bedient, an engineering professor at Rice University and co-director of the Storm Surge Prediction, Education, and Evacuation from Disasters (SSPEED) Center. ‘We’ve done nothing to shore up the coastline, to add resiliency … to do anything.’ “

Postscript: In 2013, Green New Update produced a four-part series, full of resources, on Rising Waters. Here’s the portal. Plus we covered the catastrophic Sandy hurricane and storm surge from 2012.  We are updating the Rising Water series in early 2018 with examples of how island nations, cities, and deltas around the world have developed tangible solutions to the catastrophic effects of severe weather, floods and storm surges.